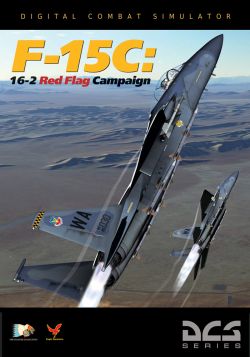 Bring your trusty F-15C along and participate in the Red Flag exercise held in Nevada. You will be up against red forces from, among others, Nellis AFB's own Aggressor squadron. Unlike the BFM and ACM courses they offer, this is a full-scale simulated war game offering a number of different tasks in a complex target environment — make sure your IFF and AWACS comms are working, and conserve your munitions to last you through the entire mission.

You will obviously need to own both the F-15C/FC3 aircraft and the NTTR terrain modules to take part in this campaign.

The war game does not have a storyline, as such, but rather different mission setups for each day to test and train different skills for the participating forces. Nevertheless, the supporting material includes some between-mission thoughts from the pilot along with its detailed mission descriptions and combat area maps. The missions are fully voiced and about as scripted as one would expect from a meticulously planned training exercise. For the most part, the overarching exercise itself is the same in this campaign as it is in the 16-2 for A-10C campaign, only you are seeing it from the CAP rather than the CAS perspective.

As part of the proceedings, you are expected to not just make full use of your aircraft and other elements of your flight, but also adhere to the ingress/egress and safety rules and ROE of the exercise and of the NTTR as a whole.

The campaign puts you through 10 air-to-air sorties with varying and even mixed tasking. The objective is not just to beat the enemy or to get home safe, but to ensure that the friendly forces you are protecting survive as well.

All missions start and end at Nellis AFB, taking you through the Sally corridor up towards the north-east of the NTTR before heading west into the exercise area. The navigation system in the F-15C obviously makes the former a lot easier than it were back in the F-5E-3 aggressor missions, but it still requires you to keep track of being at the right place at the right time to fulfil your task assignments.