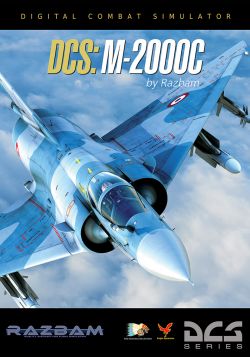 The Dassault Mirage 2000C is a supersonic multirole fly-by-wire delta-wing aircraft, which sans technobabble means it is fast and nimble and capable of both air-to-air and air-to-ground combat. Of the two tasks, the C model (for “Chasseur,” or fighter) is more at home in the air-to-air role, featuring DCS's first proper BVR radar available in any of the full-fidelity, non-FC3 aircraft. Before this, there were only the F-5E-3, that had no radar-guided weapons, and the MiG-21bis that had no look-down capabilities, neither of which offered any kind of tracking or target information — only an indistinct blip to steer towards.

Some would argue that the M-2000C's radar, with its need to pick the right filtering modes and scan zones and antenna elevation and, consequently, with its tendency to lose track of a target at the most inopportune moments, is no better than those earlier modules. Those people are silly and wrong.

The M-2000C's air-to-air focus is made further evident by its features list:

In many ways, then, the M-2000C is very much like a more fully-developed and advanced version of the F-5E-3 — if you like flying the MiG-28 Tiger, chances are that you will enjoy flying the Baguette as well.

The M-2000C is for the most part a finished product — finished enough, at least, to not be marked as “early access” in the DCS shop. It earns its “beta” status mainly due to a number of missing (supposedly upcoming) features to the VTB/HDD radar display:

The M-2000C is very very easy to fly thanks to its fly-by-wire controls. You point the flight path marker where you want to go and the computers try go get you there. If they can not, they keep trying until you have no energy and fall belly-first into the ground. Departure from controlled flight invariably manifests itself as the airplane pointing in one direction, but gently and inevitably sliding off in another, and getting out of it is mostly about convincing the computer that, no, you actually want to try a more fruitful direction that the one it is currently struggling to maintain. Almost always, this means forcing the aircraft into the ground and ignoring the screaming warnings, possibly in combination with some deliberate pilot-induced oscillation to forcibly overload the FBW system.

Under more normal flight conditions, it gets even easier since the FBW enables and drives an advanced, but very simple to use, autopilot system. In its most basic mode, it simply holds the current attitude and that attitude can be adjusted by moving a steering dot around on the HUD with the trim hat. Alternatively, you can momentarily pause the AP with a button press, manually adjust the aircraft, and the AP will hold whatever attitude it is in when the button is released. In the more advanced altitude hold modes (yes, plural) it either holds the current altitude or holds a set altitude once reached. Here, the trim hat changes the altitude and also dials in a course heading on the nav indicator. Finally, there is the approach mode, that follows a captured ILS signal down to the threshold — under good conditions, it takes the plane all the way down to the tarmac (but do not rely on it — hands on stick at all times). Note that none of these modes (especially not the landing AP) automate the throttle. It is up to the pilot to maintain proper thrust at all times. 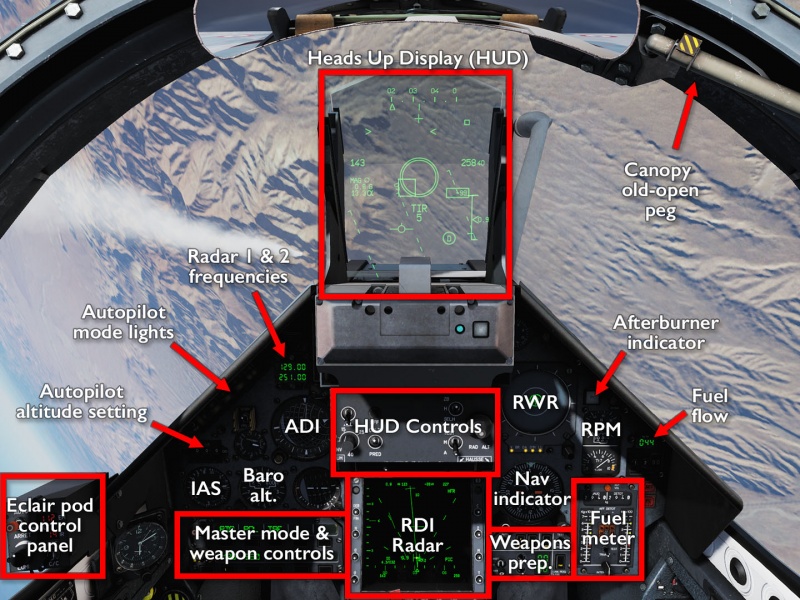 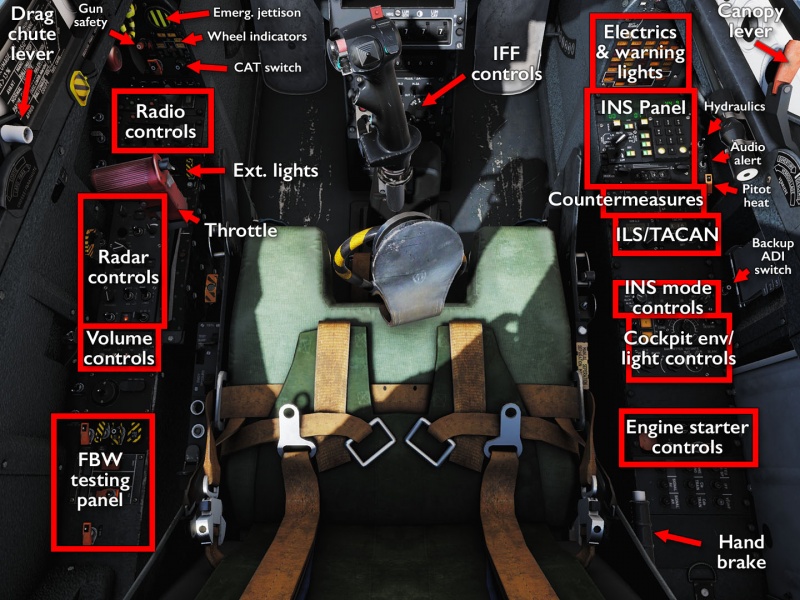 Getting the M-2000C started is, on the one hand, very easy: just flip everything on — preferably, but not necessarily, in the right order — and the difficulty lies in remembering every little nook and cranny that there are switches in. On the other hand, it is a very long-winded process, due to two of the more complicated on-board systems: the INS and the FBW.

The inertial navigation system needs to be initialised, aligned, and possibly even programmed with waypoints if the mission itself does not provide them. The alignment is a five-minute process; the waypoint input can take a very long time if it is a complicated route or if lots of details are added to it. You can certainly take off without the INS working, but of course, you will be relying on visual or radio navigation at that point.

Similarly, the fly-by-wire system and autopilot require a fair amount of testing to give a green light and be safe for operation. It is also a bit annoying because, while completely automated, it is just long enough that it is not just something you speed by, but at the same time, it is just short enough that it does not really give you any good opportunity to deal with some other system setup at the same time. Again, you can take off without these tests, but a very angry red warning light will be glaring at you throughout the entire flight, and if something goes wrong, you might not know it.

For those in a hurry, the aircraft has the fairly standardised RWinHome “cheat” hotkey to run through the startup process. For everyone else, the procedure consists of:

The full process, and in particular the differing methods for aligning the INS, are described in more detail in the manual, and in the checklist and, as usual, Chuck's guide linked below. 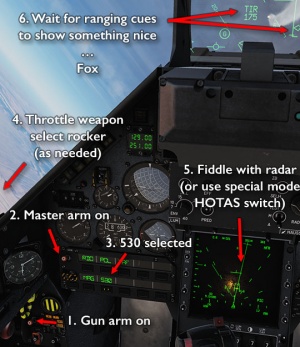 The “Chasse” version of the Mirage is primarily intended for air-to-air engagements, and the different ease of employment of the related systems amply demonstrate this. Weapons are managed by the PCA (“Poste de Commande Armement”) and PPA (“Poste de Préparation Armement”) panels on the left and right side of the radar display. The former is for selecting weapons and nav modes; the latter is for setting up those weapons. The latter is hardly ever used with AA weapons other than to put the weapons to sleep in a long ferrying flight (eg. to not waste IR seeker coolant).

For AA, there are two HOTAS switches that are particularly important to have bound and be familiar with: the Weapon Select rocker on the throttle and the Special Modes switch on the stick. The former lets you switch between the three air-to-air weapons the M2000C carries; the latter lets you bypass some (but not all) of the annoyances that the Mirage's radar is famous for. Both the radar and the S530 missile have BVR capabilities, but the need to use single-target track to guide the semi-active missile all the way to the target means that after the first shot, you are likely to be in the merge at close range, at which point the close-combat vertical, horizontal and boresight modes will be far more effective than any manual fiddling.

The process for selecting weapons and engaging an air target is therefore this:

Much like the F-5E-3, the M2000C can carry a respectable amount of air-to-ground weapons, but is hampered by missing and/or inaccurate delivery modes to put those weapons where they need to go. It has both CCIP and CCRP, and even a fancy INS-guided bomb delivery mode, but they are not pilot-selectable and instead depend on which weapon is used. The CCRP mode is generally less precise as the steering guidance is not good about showing small deviations, and the release cue can appear very quickly with some attack profiles.

Fortunately, much like with the F-5E, there is a solution: laser guided bombs and JTAC/buddy-lasing.

Indeed, the employment procedure as a whole is very similar, except for using the M2000C's target spot designation feature rather than a fixed depressed aiming pipper. Note that, while the wording in the manual almost seems to imply otherwise, the M2000C does not have a laser spot sensor — putting the target point on the right spot is still something the pilot has to do manually, either using visual spotting, directions from FAC, or smoke deployed on the target.

The CCRP release cue is generally accurate enough that a slight deviation will still let the bomb catch and guide on the laser. To improve the odds further, do the targeting and release in a 10-15° dive so the seeker is already pointing downwards.