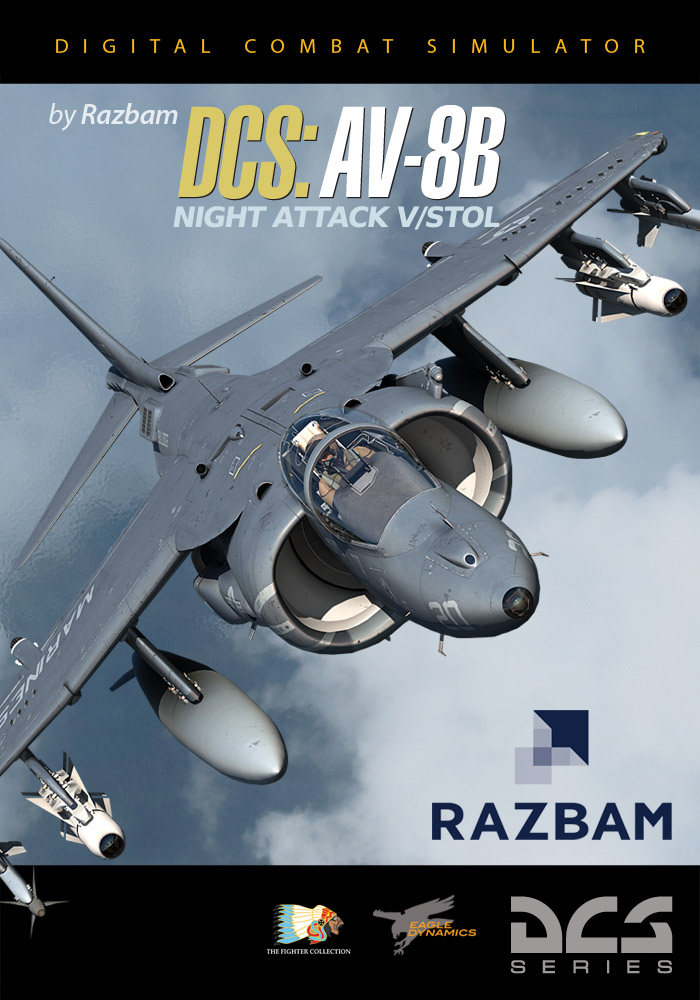 For those instances when going fast like a jet and also sitting still like a helicopter are just as desirable, there is the quintessential intermediate: the VTOL jump jet. Long before we got to the modern political and financial messes of Ospreys and F-35s, there was the Hawker Siddeley Harrier. First introduced in the late 1960s, it was developed into numerous different variants and generations, and licensed off to different companies to create their special version.

The AV-8B NA Harrier II available in DCS is a fairly late version, license-built by McDonnell Douglas for use by the USMC. The NA (Night Attack) variant, in particular, was designed for — shock and surprise — night-time ground attack missions, with built-in FLIR and tighter integration with NVGs and targeting pods. It uses a tilt-nozzle design to achieve V/STOL (Vertial or Short Take-Off and Landing) capabilities, primarily from aircraft carriers, but can also carry a shocking amount of precision weapons if full-length runways are available for more conventional take-offs.

The two main downsides is that with no radar and with only Sidewinders at its disposal, it is somewhat lacking in air-to-air (setting it apart from the “Plus” variant, with a radar rather than FLIR, and with the ability to carry AMRAAMs), and that it has the fuel capacity and flight range of a 1970s muscle car with a hole drilled through its petrol tank.

The Harrier is a bit of a narrow-focused sub-variant of a purpose-built special version of an already fairly specialised airframe, and its feature set readily reflects this:

The Harrier also has a side-job as something of a short-range SEAD aircraft. For this role, it comes with:

And of course, it can take off and land vertically, with if you get the hang of setting the right balance between nozzle, pitch, and roll angles, and thrust settings (enough to stay up, not enough to set everything on fire) and doing it all before your fuel runs out. It has a bit of stability automation and HUD guidance to help with the process, though.

And yes, you can identify as an attack helicopter, and do hovering pop-up missile attacks from behind a hill, but chances are you will flip over and explode. And also run out of fuel.

The Harrier is marked “Early Access” in the DCS shop, and for a good reason. It is fully capable of doing all the things you expect it to, but just like with the M2000C and MiG-19P, in their rush to move on to newer, more exciting products, the developers have left some details behind to (hopefully) be added later:

Jumpjet functionality aside, in conventional flight, the AV-8B is really easy to fly. The assist systems needed to keep it right side up during VTOL operation keep stability high even outside of that regime, and its well laid-out glass cockpit makes everything easy to keep track of.

The pilot still needs to be aware of two things, however. The first is that the Harrier's broad stubby wings means it does not like to turn — it will happily pull high AoA and lose lots of speed really fast, but actually changing direction takes a while, and side-slipping is a constant issue. You can use thrust vectoring to compensate for some of that however. The second is that those same stubby wings, and the general narrow design, means that it does not react well to asymmetric loads. Firing off a missile will imbalance the aircraft and will require a fair amount of counter-stick or trimming to stay on top of. You also want to be aware of that imbalance as you turn since, combined with the aforementioned resistance to turning, you can quite easily accidentally roll into an attitude you almost can't roll out of, where you will quickly lose speed and have the nose dip towards the ground. It rarely gets catastrophically uncontrollable, but requires some altitude to get out of, and should preferably be avoided to begin with. 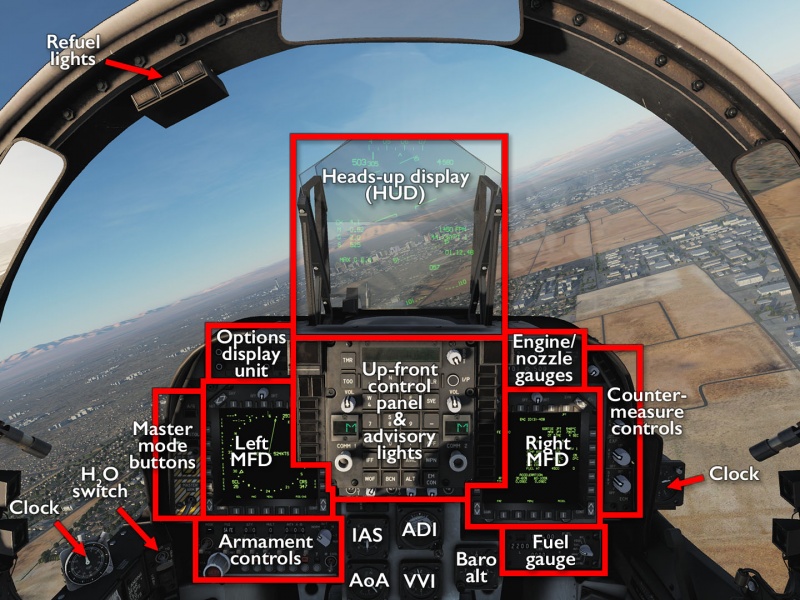 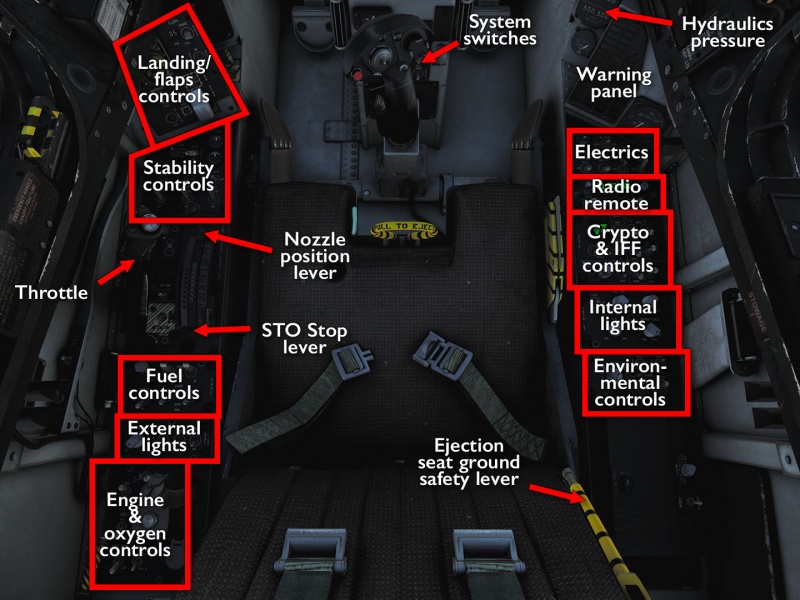 Getting the Harrier up and running is not a particularly complicated process. Its complexity means that it is not exactly F-5E-3 quick, but it still has fewer systems, and thus less required setup, than the A-10C. Indeed, some systems can't be fully set up while you are still on the ground because they remain in a safe mode any time you have weight on wheels.

As with pretty much all full-sim aircraft there is the standardised RWinHome “cheat” hotkey to run through the startup process, and the full process is described in the manual and Chuck's Guide linked below. The short version of it all is:

In practical terms, flipping everything on takes more steps and more time, but the part that requires attention to look smooth and stylish is all that throttle/nozzle/flaps balancing at the very end.

Shooting things in the Harrier is on the one hand really simple, but on the other hand, requires fairly specific procedures that are slightly different for every single weapon. This slight paradox comes down to three main quirks with how the Harrier works:

As such, the whole topic of sensor management is a (long) lesson of its own, and best left for the manual, Chuck's guide, the training missions, and a myriad of online videos. Here, we will just look at two of the more simple cases.

The AGM-65 is among the easiest weapons to use on the Harrier, and the only real stumbling block is that it falls afoul of the first of the aforementioned quirks: it can only be controlled properly from the left MFD. If you try to activate it from a Stores page on the right MFD, nothing will happen.

The other thing that might trip you up is that the Maverick requires 3 minutes of warm-up (or cool-down) before it can be fired, and this can only happen with the Maverick selected while in the air. During this time, the Stores page will display a “STBY” flag on the bottom row, and deselecting the Maverick at this stage will reset the timer. Once it is up and running, however, the STBY will change to “RDY” and you can now freely select other weapons and not have to restart the timer. 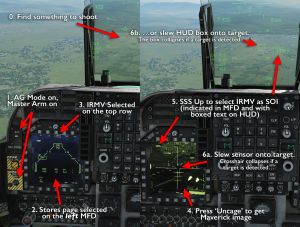 With all that set up, the process for firing a Maverick at something you've found is fairly straight-forward:

A slightly more complex matter, but one that you will most likely do a lot since the Harrier can carry an insane amount of the little things, is dropping GBU-12 laser-guided bombs onto things. If someone else is doing the lasing (a buddy or a JTAC), this becomes fairly trivial — just set the correct laser code and drop bombs in vaguely the correct direction.

If you want to pick your own targets, however, you have to wrestle with the LANTIRN targeting pod, which, as mentioned, requires a bit of care not to break things.

Just like the Maverick has its post-takeoff warmup, the GBU needs to be set up properly by picking a laser code. This is done by going into the DMT screen (pick the lower middle MENU option on either MFD, and then the DMT mode on the left side of the display), selecting the CODE option on the upper left, and entering the desired code using the UFC keypad. This can only be done in the air — any time there is weight on the wheels, the code resets to 1111. If the input does not want to cooperate, deselect and then reselect the CODE option and it should work.

From there, you want to select the targeting pod on one — commonly the right-side — MFD (lower middle MENU, then middle right option).

While it is possible to control most of the targeting pod's function through various HOTAS shortcuts, it is very finicky and easy to pick the wrong thing, thereby losing control over the TGP — in the current state of the module, this may become permanent until you restart — so it is generally advisable to stick to the MFD buttons and to stay away from the direct-control “HST” mode. Instead, use TDC mode to control the targeting pod since this is least likely to cause any issues. 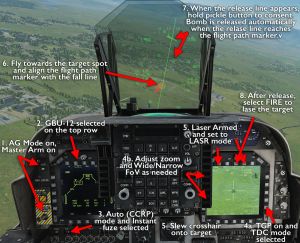 Caveats out of the way, the use of GBUs takes a few steps, but is actually fairly easy:

After having launched a missile or dropped a bomb, you are usually confronted with the decision between immediately picking a new target or resetting and coming around for a second pass. Picking a new target is easy with both the above weapons: just uncage the next Maverick and slew it over, or just slew over the TGP crosshair and reposition for the next drop.

Both of these mean sticking around uncomfortably close to, or right above, enemy targets so it is fairly common to want to go out at a distance and start a new attack run. You can return the Mav seeker and TGP target spot to boresight (overlapping the flight path marker) by pressing the NWS/AG Undesignate/FOV Toggle button on the HOTAS. From here, you can point your nose at the general direction of a target and slew the target marker or crosshair over more precisely to where you want it.

However, if you are in any way interacting with the DMT TV Tracker, in the current state of the Harrier module, it has a nasty habit of taking over everything and dictating how resetting and slewing works. It is very fond of not boresighting at all, but rather locking on to a random patch of sky or particularly interesting tuft of grass, and now your Maverick and/or TGP is stuck looking at that same spot. You may be lucky and do the exact right SSS-button chicken-waggle voodoo dance, and actually have it reset, but you are just as likely to just freeze the system completely and be unable to move any sensors.

Not to put too fine a point to it, avoid using the DMT sensors (TV and LST) unless they are the only ones you have. This is less of a bother than it may sound. You want to use them, and their automated interaction, when you are engaging buddy- or JTAC-lased targets with GBUs or E-variant laser-guided Mavericks, or when you are just carrying dumb bombs and a TGP does not help much. Any time you do carry a TGP or a weapon with its own sensor, you should just stay away from the SSS Down switch (the button that selects DMT TV and LST), since it will invariably just cause issues.