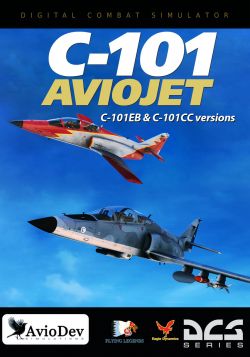 Ever had a hankering for a large, unswept, multi-crewed, ground- and sea attack training aircraft that would struggle in a straight-speed competition against the A-10? Well, good news: the C-101 is the module for you! In many ways, this is the Spanish take on the L-39: it is a relatively simple jet aircraft with room for a pilot and and rear-seat instructor, where the instructor can take over most of the flying if the pilot turns out to be a bad student, but can't really do the pilot's job as far as making things go boom.

The C-101 has been around in DCS for a long time, with a small team slowly whittling away at the problem and producing an unsteady stream of updates that at some point has congealed into something that has come to resemble a pretty good aircraft module. At times, so little seemed to happen that many feared the C-101 was headed into the same oblivion as the now-abandoned Hawk T.1A module, but Aviodev persevered and the pace has picked up considerably as of late.

Comes with the built-in campaign C-101s Over Georgia.

The C-101 is not listed as “early access” in the DCS store, but don't let that fool you: this is still a module under development. As such, there are a few things that still need work from the developers:

Overall, the C-101 is a fairly simple aircraft to fly. Its setup and controls layout offers very few surprises and it will give you plenty of warnings if you're trying to push it too hard. But that is also something you will recognise very quickly: it is not an agile speed demon, and it doesn't take much for the aircraft to feel that it is being pushed too hard.

Any kind of pull on the stick will set off the AoA warning, and it has neither the acceleration nor the top speed to simply power its way out of a bad situation. This holds doubly true in the CC model, where these base characteristics are not exactly improved by hanging all kinds of draggy and heavy ordnance under its wings.

The C-101 has a reasonably well designed cockpit, but it also suffers slightly from being a trainer. The EB model has all the controls and gauges that you'd want to see as you learn to fly the thing, but in the CC model, this translates into having very little left-over room for the extra weapon controls that the combat model needs. Some crowding and odd arrangements of seemingly related controls is the unavoidable consequence. 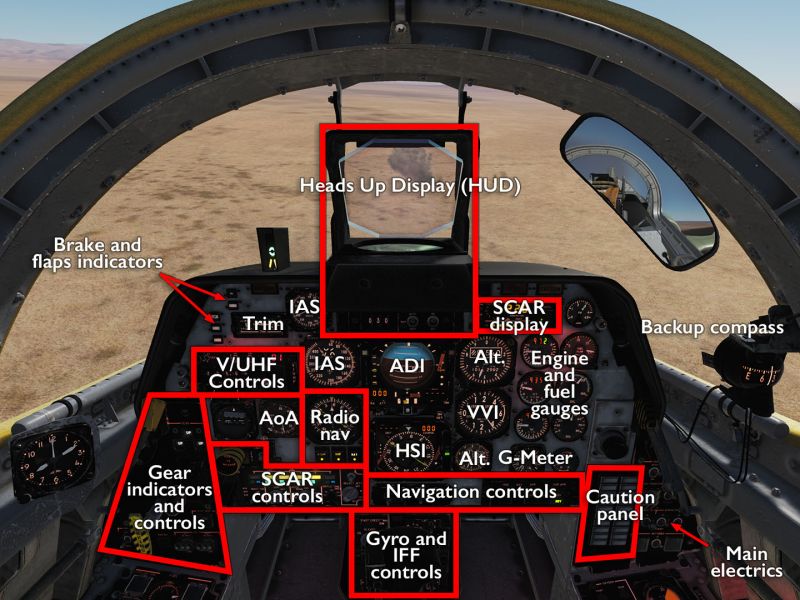 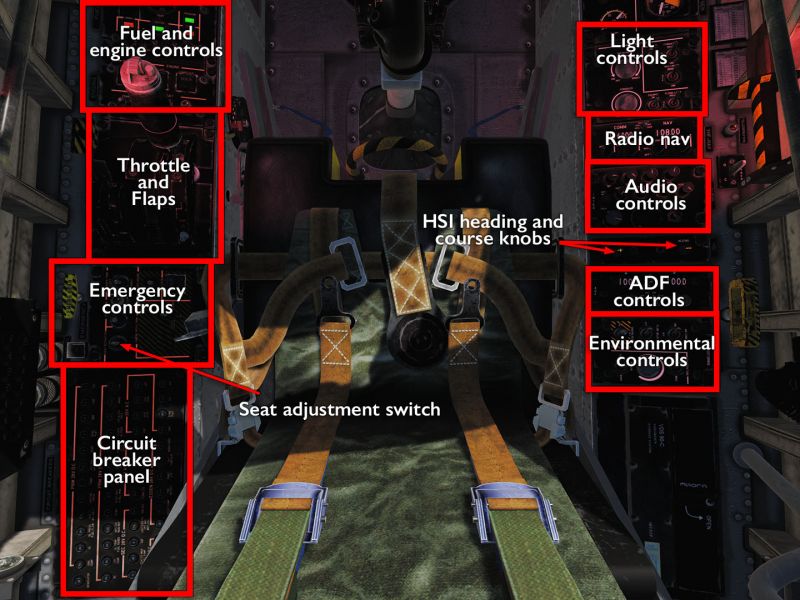 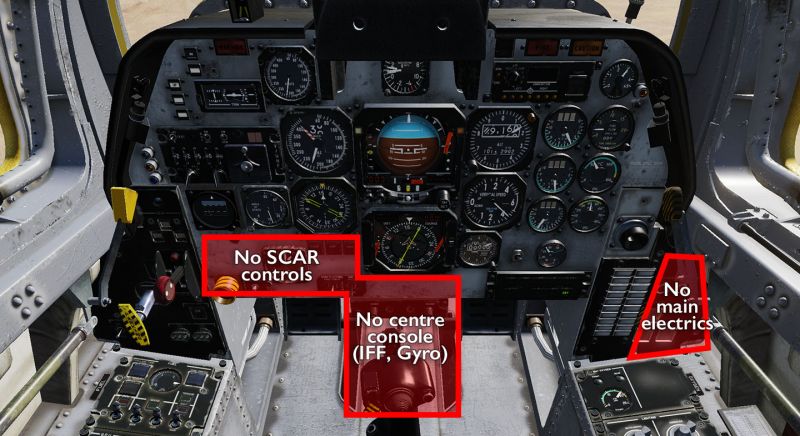 The back seat of the C-101 is for the most part the same as the front seat. What is missing is some of the combat-specific controls, such as the weapon selection and release systems, IFF systems, and the starting electrics. Presumably, if the instructor has to land the thing, you can just ask the ground crew to hoist out the trainee and then turn everything off from the now-vacated front seat.

As mentioned, the EB and CC models are mostly the same in terms of major instrument placement, but the need to add weapon controls to the CC meant that some things had to be shifted around. The above image shows the core instrument commonalities, where some specific gauges have moved around a little or changed design, but the general instrument scan is more or less the same. Of note is that the radio console has changed to make room for the SCAR (Selection and Control and Release) panel, and this is also a subtle hint at a more significant difference between the two: the EB model offers TACAN navigation; the CC model does not. The EB also has a much larger focus on the automated flight director, whereas it CC pilot is meant to make due with a reduced variant.

Getting the C-101 going is not an overly complex procedure because it is, quite simply, not a very complex aircraft. As usual, there is the standardised RWinHome “cheat” hotkey to run the process for you, and it is fully described in the manual and in Chuck's guide linked below. The gist of it all is: 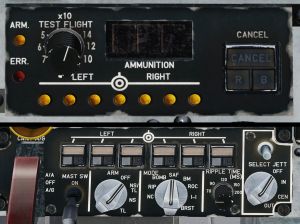 Weapon selection in the C-101CC is very reminiscent of what you would see in the classical A-10A: on the SCAR (Selection and Control and Release) controls you pick pylons using illuminated push-buttons that communicate the loading state of that pylon. You then set up firing signals — ordnance type, ripple amounts, ripple timing and the like — with a couple of dials, and then you check the SCAR display to see that the right type of firing signal will be sent.

For rockets, the process is this:

You are now ready to struggle with the actual delivery of the rockets, which is nothing like what the good old 'hog offers. Instead, it is a matter of setting up the stadimetric rangefinding pipper on the HUD (i.e. you compare the apparent size of the target with a preset angle indicator — when the two match, the target is at the right range), and then delivering your weapons at the right speed and at the right angle from the right altitude according to extensive delivery tables in the manual or in Chuck's guide.

The gyro sight and the range finder, controlled by twisting the throttle, makes this setup reasonably simple, but it requires a steady hand and precision flying to be within the right parameters. Or you can just ignore the whole thing, set the sight to manual depression and dial in an angle you are comfortable with.

All other weapons follow a similar procedure, except with different settings on the ARM and MODE dials, and on the display mode button. The Sea Eagle missile, for instance, is for delivery purposes just a rocket with no need for any real aiming from the pilot.

If loaded in an under-slung pod, guns are always available as a secondary weapon that can be fired alongside and independent of the wing-carried stores. To get them up and running:

The SCAR display panel has a digital ammo counter that lets you keep track of how much you've sprayed lead all over the place to little effect.