Difference between revisions of "MiG-15bis" 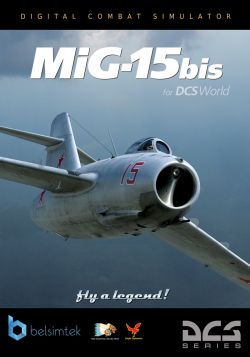 The end of WWII, two radical new technologies entered warfare: nuclear weapons and jet engines. The threat of the former, carried by the B-29 long-range strategic bomber, mean that the latter had to be used to create a countermeasure. The MiG-15 was that countermeasure, and it turned out to be a very lethal threat to pretty much anything in the air at the time. It came as a nasty surprise in the skies over Korea and had no viable counter of its own until the introduction of the F-86.

Much like the same-era F-86F, the DCS World version of the MiG-15bis sits in a strange place between the earlier, almost completely mechanical and manual WWII prop fighters, and the systems-heavy and highly automated modern jet fighters. Between the two, the F-86F leans more towards the future, with its early missiles, automated sight, and bombing modes, whereas the MiG-15bis leans more towards the past, with its still rudimentary ground controls and its reliance on simple guns and bombs.

Much like the F-86F, the leap forward the MiG-15bis represents needs to be measured against the WWII prop planes that preceded it, not with anything that followed afterwards (including the F-86F). Many of these advanced features are similar to what would soon be found in the Sabre, and for similar reasons:

The MiG-15bis was built to quickly climb to and catch up with strategic bombers as they came near to, or crossed over, the Soviet borders. Even so, it was not a Mach-capable aircraft — it did not need to be — nor a nimble dive bomber. Its early swept-wing design and jet engine were respectively vulnerable to compressibility issues at higher speeds leading to loss of effectiveness in the controls, and to compressors stalls if flown at high angles of attack or asked to quickly jump between different power levels. The inclusion of speed brakes were a necessity for both: to slow the aircraft down so the controls regained their effectiveness, and so that yanking the throttle back and forth was not the only way of losing or gaining speed — instead, high RPMs (or dive angles) can be maintained while still not picking up unwanted speed.

Both of these problems are shared with the F-86F — the MiG-15bis just suffers from them earlier, and therefore prefers to hit quickly and climb up to safety where the Sabre performs less well. At the other end of the spectrum, the MiG-15 also really dislikes low speed — it geta awfully wobbly quite early, and requires quite a bit of time (and consequently altitude) to get out of that state due to its slow-responding engine. Be careful not to underspeed during landings, because it is the worst combination of circumstances to get out of. 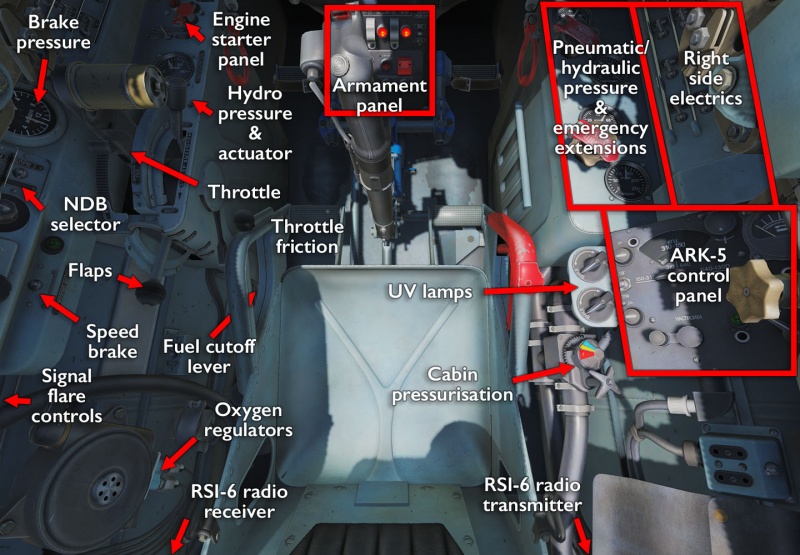 Starting the MiG-15bis is not really a complicated process, but it is made a bit unintuitive due to how key instruments and controls are scattered and hidden around the cockpit, and due to the fact that it does not start with turning on the onboard batteries. Indeed, doing so has a fair to even chance of killing the batteries outright and grounding the sortie. Instead:

Now it is just a matter of taxiing, which means getting to terms with the rudder+brake lever style of differential braking — a system similar to what you will find in the L-39, MiG-21, Yak-52 and Spitfire.

With as limited as the MiG-15bis' weapon systems are, getting them ready is pretty easy.

North Korean MiG-15bis at the National Museum of the USAF
Retrieved from "https://www.airgoons.com/wiki/index.php?title=MiG-15bis&oldid=4385"
Categories: