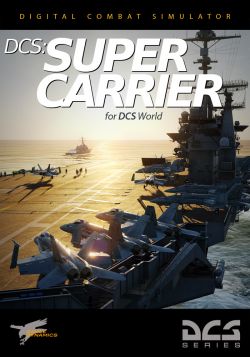 DCS: Supercarrier is a long-anticipated and long hyped attempt at injecting a bit more realism into one of the more complex parts of aviation: putting a fighter jet onto a heaving carrier deck without exploding. This module adds a more detailed version of the Nimitz supercarrier than is already present in DCS, with more navigation aids, animated deck crew, more advanced spawning options, more elaborate ATC and approach procedures as well as additional not-quite-spectator roles such as Air Boss and LSO, similar to the JTAC and tactical commander roles available in Combined Arms.

In addition, the module adds a few more decorative static objects and vehicles to round out a fleet-based mission, just in time for the release of the Mariana Islands map: deck vehicles, the Arleigh Burke destroyer, as well as updates to the Russian Kuznetsov carrier.

According to the pre-sale blurb, Supercarrier will feature:

While only owners of the Supercarrier module will be able to interact with all of this and use the assets in the mission-editor, non-owners can still fly in multiplayer missions where the supercarriers are used — they just can't spawn, launch, or do (proper) recoveries on them.

The Supercarrier module is still in early access, and while the announced feature list is nice, there are quite a few things missing:

On the other hand, the implementation of Supercarrier, even in the base game so as to support its existence in multiplayer missions even for non-owners, means that some features have been backported into the old carriers and solved some long-standing issues with them. Spawn queues and spawn slots are now less of a limitation (but still do not work properly for the Harrier).

While it is completely non-interactive, it is possible for observers to get a full view of the new launch operations with all the funny-coloured men running around and waving in the air. A new catapult camera view can be accessed using RCtrlF9 that gives a close-up of the action.

Carriers in DCS have had a recovery view for ages, but it has been somewhat hidden and even its one feature — a zoom — was removed at some point. With the Supercarrier, the LSO view is back, now with fully animated PLAT cam screens and controls, some of which might at some point become interactive. For now, the LAltF9 key combination accesses the view on any selected carrier, and while the station itself offers no interaction, the screens still display ship, wind, aircraft, and glideslope information that can be used in multiplayer to guide other people down.