In DCS World, the MiG-15bis and F-86F Korean-war era fighters sit in a curious position, only slightly more advanced than the WWII-era fighters that preceded them, with very few systems to speak of, but with flight characteristics and handling that is much more in line with what we have come to expect from later-generation aircraft. They are no longer torque-heavy tail-draggers, but are not yet loaded with sensors or pilot aids or other automated system. The absolute first fledgling steps of the early jets have been taken, but some teething problems still exist. Since the Modern Air Combat versions are simplified versions of already simple aircraft, there is not a whole lot to do in them other than to point a target reticule at an enemy and hope that early-jet aerodynamic design does not suddenly decide to screw you over.

Much like the F-86F, the leap forward the MiG-15bis represents needs to be measured against the WWII prop planes that preceded it, not with anything that followed afterwards (including the F-86F). Many of these advanced features are similar to what would soon be found in the Sabre, and for similar reasons:

The MiG-15bis was built to quickly climb to and catch up with strategic bombers as they came near to, or crossed over, the Soviet borders. Even so, it was not a Mach-capable aircraft — it did not need to be — nor a nimble dive bomber. Its early swept-wing design and jet engine were respectively vulnerable to compressibility issues at higher speeds leading to loss of effectiveness in the controls, and to compressors stalls if flown at high angles of attack or asked to quickly jump between different power levels. The inclusion of speed brakes were a necessity for both: to slow the aircraft down so the controls regained their effectiveness, and so that yanking the throttle back and forth was not the only way of losing or gaining speed — instead, high RPMs (or dive angles) can be maintained while still not picking up unwanted speed.

Both of these problems are shared with the F-86F — the MiG-15bis just suffers from them earlier, and therefore prefers to hit quickly and climb up to safety where the Sabre performs less well. At the other end of the spectrum, the MiG-15 really dislikes low speed as well — getting awfully wobbly quite early, and with its slow-responding engine, will require quite a bit of time (and consequently altitude) to get out of that state. Be careful not to underspeed during landings, because it is the worst combination of circumstances to get out of. 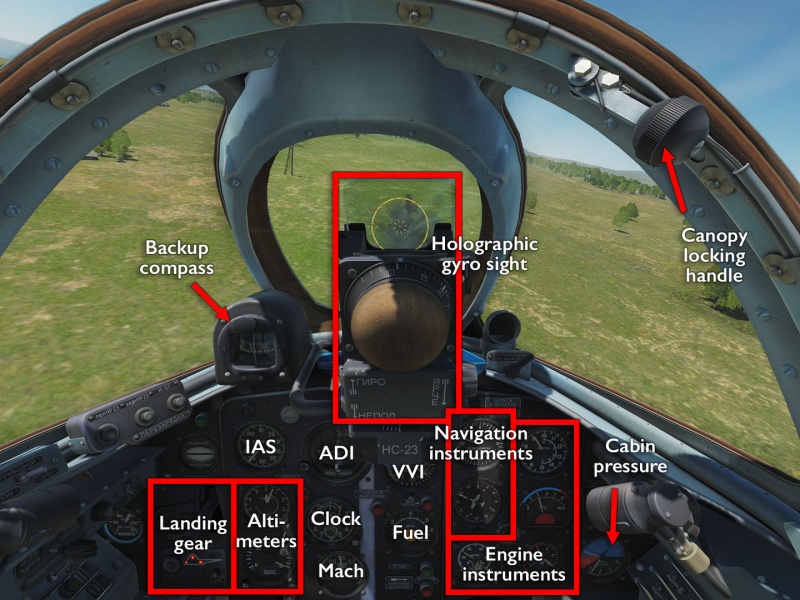 Getting the MiG-15bis into the air is much the same as all other MAC aircraft:

Without any guidance systems to speak of, shooting something in the MAC edition of the MiG-15bis is mainly a matter of spotting a target and putting the sight on it. When using the guns, which is what you will be doing most of the time, remember that the two different calibers have different ballistics and will not all fall in the same place.