In DCS World, the Sabre and MiG-15bis Korean-war era fighters sit in a curious position, only slightly more advanced than the WWII-era fighters that preceded them, with very few systems to speak of, but with flight characteristics and handling that is much more in line with what we have come to expect from later-generation aircraft. They are no longer torque-heavy tail-draggers, but are not yet loaded with sensors or pilot aids or other automated system. The absolute first fledgling steps of the early jets have been taken, but some teething problems still exist. Since the Modern Air Combat versions are simplified versions of already simple aircraft, there is not a whole lot to do in them other than to point a target reticule at an enemy and hope that early-jet aerodynamic design does not suddenly decide to screw you over.

The features of the F-86F may seem trivial, but compared to, say the P-51D, or even to the MiG-15, these are significant steps forward:

The F-86F was designed to go high and fast, but at this early stage, the kinks in the high-speed jet design were still being worked out. When encountering high compressibility — close to mach speed, and especially at lower altitudes — it loses aileron effectiveness and is prone to unintentional rolling due to the wing design. Similarly, while capable of pulling high G:s and high AoA, doing so can easily result in stalls and spins, both of which require a fair amount of altitude to get out of, and if it picks up excessive speed during that descent, the aileron effectiveness issue kicks in and makes controlled recovery that much harder.

…but other than that, it's a really easy and hands-on aircraft to fly. Just be careful not to yank on the throttle too much, since that will tend to cause compressor issues that can kill the engine. The temptation to do a lot of yanking is pretty high, though, since it is not the most responsive engine in the world. 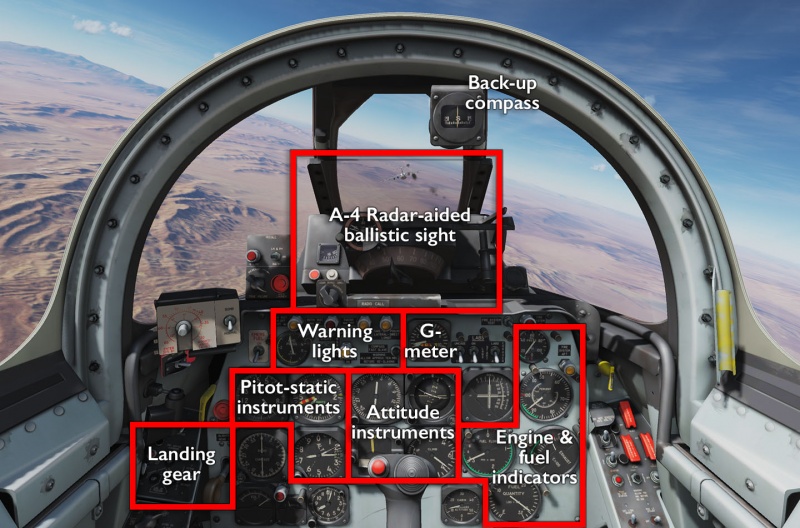 Getting the F-86F into the air is much the same as all other MAC aircraft:

Without any guidance systems to speak of, shooting something in the MAC edition of the F-86F is mainly a matter of spotting a target, selecting a suitable weapon (D) and putting the sight on it. Using radar guidance (I and 3) offers some help with accuracy, but Its GAR-8 missiles have horrible range and are spoofed by a light sneeze, so it almost entirely comes down to actual close-in dogfighting.