The latest version of this can be found in the working document here. 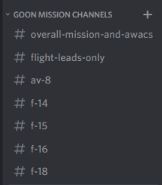 For basic wingman, the following are things you should know about AWACS, or Airborne Warning And Control System, the eye in the sky that will have often a human player. Also known as GCI, Ground Controlled Intercept, when there is no aerial asset to do it. Due to the fudging of a video game environment, in our missions this is all the same. JSTARS, or joint surveillance and target attack radar system, is the same concept, but monitors ground targets and movement from sky. As said, in our games, AWACS-GCI-JSTARS all merge into the same concept and usually just one person.