This is a more in-depth article to add on top of our Standard Operating Procedures.

When performing the job of AWACS/GCI, goons will often use the tool LotATC, and our server provides one license for free.

The purpose of this document is to provide a basic structure of how to request services and interpret calls from human AWACS so you can find and shoot at things. You are not required to use brevity codes when talking to AWACS, it only makes it easier and gets everyone more erect. If you do not know the brevity code for what you want, just give your request in plain English.

The most common call you’ll have from both AI and Human AWACS is the BRA(A) call, which stands for Bearing, Range, Altitude, and optionally Aspect. The BRAA call will tell you, in order, which direction the bandit is from you, how far away they are, what their altitude is, and what direction they’re moving in relation to you. It is important to stay with your flight leads so that this information is accurate and relevant to the entire flight.

BRAA calls can also be given using Bullseye (or bulls). Bulls is a reference point that is shared by the whole coalition, as opposed to bearing which is specific to one aircraft. In this case, it would be given as "Hornet 1-1, Screwtop, Bulls 230, 30, 20 thousand", indicating that they are 230 degrees from bullseye and 30 miles in distance, flying at 20,000 feet. 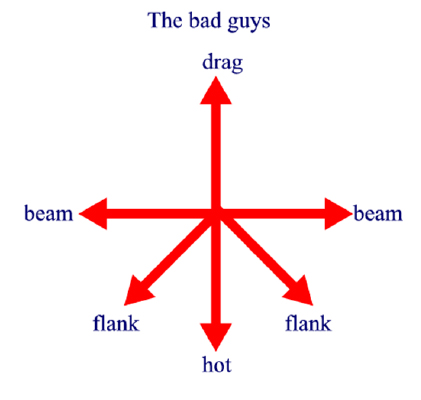 The only non self-explanatory portion of the BRAA call is Aspect, which describes the enemy’s direction of movement in relation to you. Aspect is given using the following brevity codes:

Bogey Dope is the brevity code to request a BRAA call to the next target (typically the closest target). An example of this call if your callsign is “Hornet 1-1” and the AWACS' callsign is “Screwtop” would be: “Screwtop, Hornet 1-1, Bogey Dope” “Hornet 1-1, Screwtop, BRAA: 345, 35 (in miles), 35 thousand (in feet), HOT (indicating they’re moving to intercept or are coming directly towards you)”

Picture calls are just a group of BRAA calls if there are multiple bandit groups to give you a “picture” of the AO to help you track multiple groups at a time. The only new brevity for this that we’ll be using is “monitor”.

Monitor indicates that there is a bandit group in the picture that is not actively attempting to intercept your group or another friendly group and is too far away to do any aggressive action. This tells you that the AWACS controller is watching them but you don’t need to worry about them at this time, here’s an example of how it will look:

Strobe
Strobe is used to gather information about groups in a direction you are being jammed from.

Spiked
The Spiked call is used to gather information about a target which is currently locking you up (i.e. spiking you).

The format for this call is: "SPIKED (Direction), NOTCH (Notch Direction), (Position)" (e.g. SPIKED 270, NOTCH north, BULLSEYE 240/15). Direction may be given as a heading or one of the cardinal directions (i.e. N,NE,E,SE,S,SW,W,NW). Notch and Position are both optional if time is not permitting.