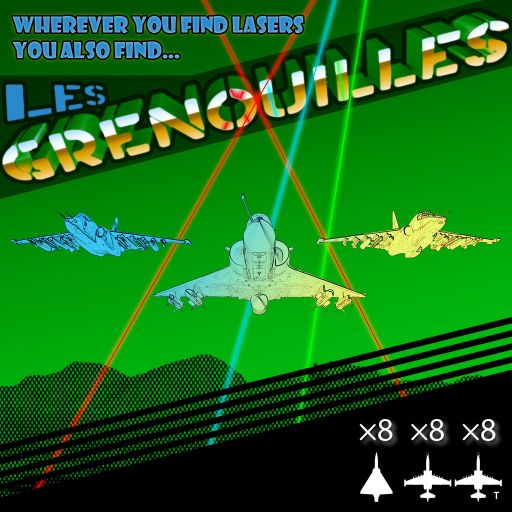 Alternative scoring is available in single-player, but the brief and general design assumes that multiple strike aircraft will be available. In addition, the opposition will scale with the number of aircraft active in the mission.

October 5, 1983
A rainy morning in Shiraz, klaxons sound to signal that the vague intel dripping in over the last few weeks seem to be accurate: enemy forces are closing in to bombard and eventually occupy key positions in the city. The main thrust seems to be coming through the Kazerun valley to the west, but equally vague intel from other sources has warned that this is partially a distraction; that the main thrust will come from Yasuj in the north-west. So far, no word has been passed down on whether that is true or not, and you will have to deal with that eventuality if it arises. In the meantime, the Kazerun attack is clearly and definitely coming. If not stopped, the valley will easily be bypassed and enemy forces will reach the city in just over an hour.

Fortunately, the terrain is what it is. There are only so many ways they can come through with any kind of real offensive capability, and those newfangled drones are already in the air, ready to spot targets for the heavy hitters. They will do the aiming while you do the fancy flying — now if only you remembered how to actually use your laser-guided weapons with someone else picking the target…

Enemy forces entering Kazerun valley seem to match our defensive strength. Short-range mobile air defences have been reported but not confirmed. AFAC flights are in place over both the valley and the eastern corridor and will spot and follow any observed enemy forces but will not follow into Shiraz airspace. Make sure to stop the troop advance before it goes out of range of the AFAC. Targets will be marked with smoke for initial guidance but remains mobile and may move away from obvious marked spots.

The central conceit of the mission is the use of automated AI buddy-lasing to guide weapons and aircraft that usually are not used in this way. The Su-25:s tend to rely on their own lasers for guidance, and the M-2000C is more commonly used as a fast interceptor. Here, the setup, the terrain, and the mix of enemy units makes it necessary to spot targets from much farther distances and in much more cluttered environment than is often used — the only aircraft that must rely on its own weapon guidance is the Su-25, mainly due to limitations in how weapon employment works, but even in this aircraft, the buddy lasing will give you a precise position at very long ranges that you can plan your attack around.

In addition, while the Mirages can fairly trivially avoid, evade, or just defeat most of the ground defensive systems, their presence is likely to provoke heavier air defences, meaning they have to serve double duty and also take care of incoming aircraft. Similarly, the Su-25T is likely to need to take on a SEAD role, but cannot employ its usual Shkval+Vikhr loadout for regular armoured targets.

Yes. In the Mirage it is easy: just load up on GBU-12s and do a regular CCRP bombing run on a (suspected or marked) lased position. In the Su-25, that is still possible using any of the laser-guided missiles or rockets (Kh-25ML, Kh-29L and S-25L). It doesn't work with Vikhrs in the Su-25T because those are beam-riding, not reflected-laser homing.

To fire any of those three missiles against a buddy-lased target in the Su-25T:

Since you are not using your own ranging equipment, you will have to estimate the distance and determine if it is in range or not. When you're satisfied, pickle.

In the regular Su-25, the same things apply… mostly. The target marking cross will overlap a lased target but you cannot launch weapons on it. The instant you pickle in the Su-25, the on-board lasing will take over and the weapons will guide on that rather than the buddy-lasing, so chances are you will miss. Instead, use the marked position to set up your own target lasing — since you know the position, you can do this from much farther out and without having to spend quite as much time visually acquiring the target yourself.

What's with that name?

It's a horrible, horrible pun. Grenouille is French for “frog”, as in the Su-25 Frogfoot, and the Mirage, made by the French.