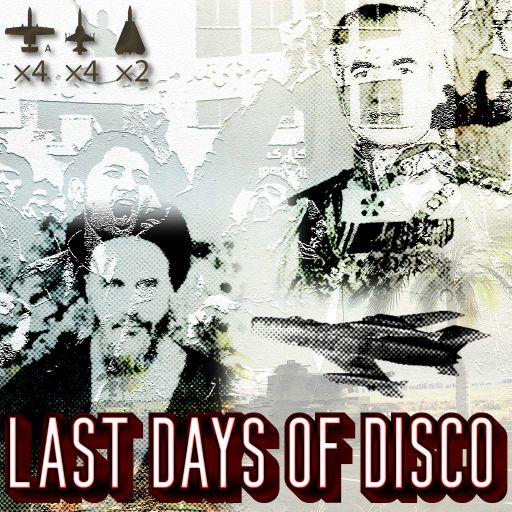 Alternative scoring is available in single-player, but the brief and general design assumes that multiple strike aircraft will be available to deal with all targets. In addition, the opposition will scale with the number of aircraft active in the mission.

January, 1979.
Over the last year and a half, protests against the Iranian Shah's campaign of liberalisation have grown in intensity and ferocity. A strange amalgamation of nationalists, anti-imperialists, and clergy has formed an uneasy alliance to force a halt to the Shah's agenda. The response of the Iranian government has become increasingly heavy-handed as the number of protestors has grown, slowly bringing the country to the brink of outright revolution.

In a shocking move, and with obvious backing from outside source, a coordinated and heavily armed attack was made by insurgent forces on a number of airfields and urban centres. The insurgents, while only having access to outmoded equipment, have been able to take and hole these key points through sheer numbers and have effectively cut the nation in half. Worst of all, the Shah's chronic indecision has been further fuelled by the loss of his favourite daily music show broadcast out of Najaf Shahr — insurgent forces have occupied the city and are filling the airwaves with propaganda rather than the music the Shah desperately needs to calm his mind. A counter-attack to retake the occupied airfields is assembled and ready, but require the go-ahead from the highest level of government. Without the Shah working up the nerve to give the order, the ground forces will not be able to move in.

The mission, then, is to strike a blow against the insurgent occupation of Najaf Shahr and, most importantly, remove the interfering radio broadcasts from the air so the crucial command to attack can be given.

Cold start at 0730.
Flight times from starting bases to assembly area, and from assembly area to strike zone yields an estimated time on target of 0815 depending on the level of coordination within the strike package.

Weather: clear skies over Kerman; scattered to dense clouds and occasional rain showers over target area. Cloud ceiling at 10,000', with a cloud front moving south over the course of the morning.

The city of Najaf Shahr is filled to the brim with primitive AAA which will offer a significant threat for the attack on the radio station. In addition, a number of obsolescent SA-2 batteries have been set up in the valley surrounding the city, but coverage is spotty and should be easy to penetrate. A sizeable contingent of insurgent aircraft, mainly consisting of MiG-15:s and MiG-19:s has been spread out over the Jiroft, Lar, and Havadarya airfields, and will most likely be sent to defend the target area.

Terrain will most likely interfere with reception and final attack ingress needs to be done visually. Nearby areas suffering damage from the insurgent attack should provide a visual clue through smoke and fire as to the location of the broadcast tower and its surrounding bunkers.

Direct ingress and egress to reduce flight time is possible at sufficient altitude, but not advisable due to air defence coverage and lack of detailed information about the exact placement of insurgent forces.

The mission is a fairly straight-forward bombing attack against a single target, but using aircraft that need to get close enough to be threatened by significant air defences. In addition, dynamic weather conditions and unpredictable enemy positions will change the dynamics of the situation depending on how long it takes for the strike package to arrive.

The opposition is low-tech, but numerous and can quickly become overwhelming if the the CAP is not doing its job or if the strike aircraft are slow to complete their task.