Iran So Far Away 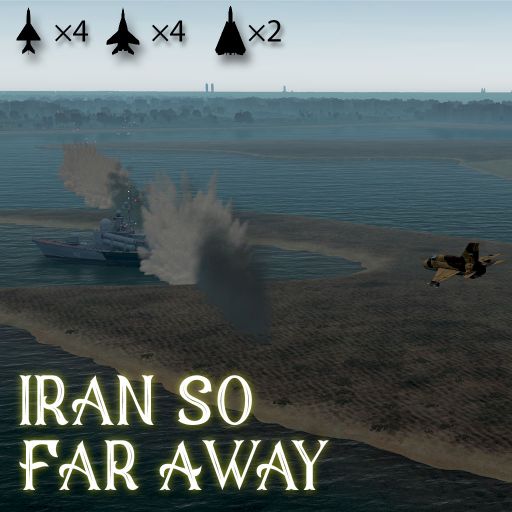 Alternative scoring is available in single-player, but the brief and general design assumes that multiple strike aircraft will be available to deal with all targets. In addition, the opposition will scale with the number of escort aircraft active in the mission.

The UAE, under the guise of reducing tensions in the region, has chosen not to engage with a group of armed insurgents gathering north of Ras al Khaimah. The insurgents are in the process of loading goods and equiment onto container and tanker ships, the suspected goal being either a take-over of Tunb island and the nearby oilfields, or an insertion on Qeshm island. This will not stand.

A strike force of anti-shipping equipped MiG-21 fighters has rapidly been assembled to take out the insurgent ships while they are still docked. While both UAE and Oman are likely to respond to the incursion, neither side will be willing to admit to backing the amassed force. Nevertheless, escort flights of MiG-29:s and F-14:s are available to cover the strike package.

The strike area lies within the outer range of Ras Al Khaimah SAM batteries but should be shielded by terrain. Expect defensive air response from Khasab and Sharjah air bases, as well as from US carrier group south of Bandar-e-Jask if the strike package lingers too long in enemy airspace.

Sources have suggested that one of the main financiers of the insurgents has been inspecting the proceedings and is about to leave for Abu Dhabi on his yacht after having delivered a final piece to the insurgent forces: an anti-air corvette that will provide aditional cover during the insurgent assault.

Friendly CAP is available along the southern border, as are air defence batteries concentrated around Bandar Lengeh, Bandar Abbas, and Qeshm Island.

Cold start at 0900
Flight times from starting bases to assembly area, and from assembly area to strike zone yields an estimated time on target of 0930 depending on the level of coordination within the strike package.

Ingress via Tunb islands to minimise exposure and time inside hostile air space.

The mission centres on anti-ship attacks using the MiG-21's Kh-66 radar-guided air-to-ground missile, meaning a good eye and a steady hand is needed to get on target while avoiding ground fire. The escorts are also limited in the type of weaponry they can bring along, and more escorts also generate a fiercer response, which in turn means less time should be spend dilly-dallying over the target area.

In addition, the mission tests radio navigation skills since the distances involved means a high flight altitude is needed to preserve fuel, but the cloud cover and the final approach over the sea means that navigating via visual landmarks is not a viable strategy. Instead, RSBN/TACAN instrument navigation (including the use of nav beacon offsets) is required while flying above the clouds (the simplified systems in the MiG-29 are obviously exempt, but the -29 alone cannot complete the mission).

In-game kneeboard pages provide a full description of the instrument flight plan, as well as a brief switch setup list for launching Groms.

What's with that name?

It's a horrible, horrible pun…