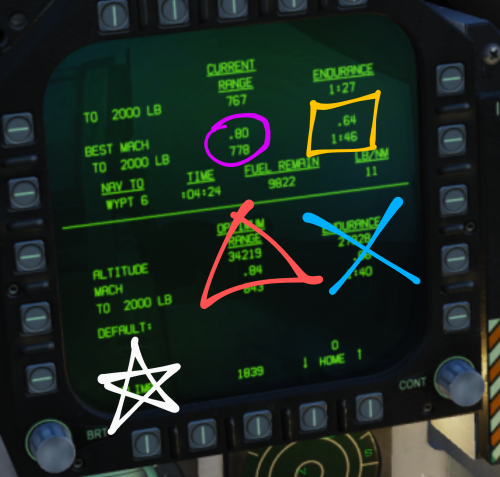 Thanks to how atmospheric pressure works, aircraft perform differently at higher altitudes than at lower altitudes. This has a profound effect on speed and fuel usage: at higher altitudes aircraft require less thrust to overcome the forces of drag, but also have difficulty breathing enough air to produce thrust in the first place. The F/A-18 designers knew of these limitations and included a comprehensive real-time calculator to alleviate the mental burden and potential for human error encountered when performing basic maths. FPAS, which stands for Flight Performance Advisory System, computes an estimated range and endurance of your aircraft and advises theoretical maximums. If you have a waypoint selected, it will also inform you of time to said waypoint as well as estimated fuel at time of arrival. 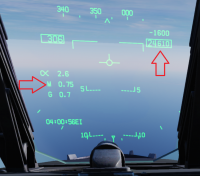 Reference your FPAS page. The very top portion (above the circle/square) informs you of your range and endurance at your current altitude and speed. You may have thought Mach 0.75 was an efficient cruise speed, but in reality upping this to Mach 0.77 gives you an extra 37 nautical miles. That doesn’t sound like much of an improvement, but what if you evade a missile, spring a leak, or need to jettison your tanks while engaging fighters ignored by your CAP?

If you are not constrained by altitude, reference the lower half to confirm the theoretical maximum range/endurance. Do note that these change over time as your plane becomes lighter through fuel burn and ordinance deployed, so it's a good idea to have this pulled up whenever you enter NAV mode (i.e. not in A2A or A2G combat).

Climb mode is used to help you ascend rapidly and efficiently. This can be very helpful when taking off at the start of a mission: while you do guzzle fuel afterburning on ascent, you end up saving fuel in the long run because you're operating where the air is thinner, and can simply glide to lower altitudes when desired.

When climb mode is activated, you will see a target speed above your HUD speed indicator. KEEP FULL AFTERBURNER and adjust your angle of attack: pitch up if you are going too fast and pitch down if you are going too slow. Level off when at your optimum range/endurance altitude, and lower your throttle to match optimum range/endurance Mach number as desired. 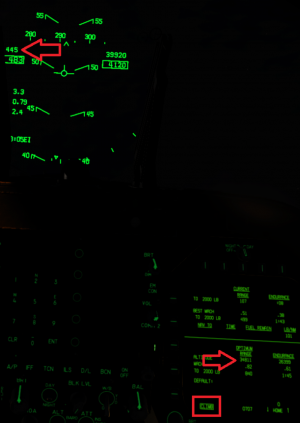