Italicised units — ones with their number in parenthesis — are optional and not necessary for the functioning of the system. Beyond that, the numbers listed only indicate the doctrinal setups and all systems only require one of each mandatory unit to work if the mission designer wants to reduce the overall unit count. Units (mainly decorative) that can be found outside the Air Defence category have their category indicated in parentheses, as do decorations that only exist as static objects. For some of the more advanced systems, it is good practice to make the command post unit the first unit in the group, but some scripting setups such as Skynet-IADS will require specific units to be the the first one in the group in order for the scripting to work.

To fully understand what different systems do and what their purpose is, one has to dive into the murky world of GRAU indices — the Russian equivalent of the JETDS or AN-system. Three general groups and naming schemes are relevant to keep track of:

To add to the confusion, there is often a lot of overlap between these schemes as different components of each system will themselves have specific GRAU codes and of course, on top of this is the often more familiar NATO reporting names for each system. The NATO names have a logic of their own, commonly using “SA” to signify a Surface to Air system, and a number that essentially works as a chronological index — the SA-2 was made (or at least officially acknowledged) before the SA-3; SA-10 came out slightly before SA-11, and so on.

A look through the setups listed below will reveal that many systems have the option to use one of two different detection systems: the P-19 search radar or the Sborka reconnaissance/command centre/air defence radar. This includes a number of IR- and optically guided systems. The choice to use these two units is a bit of a compromise.

On the one hand, including them lets the group detect enemies early and have more time to change their level of readiness, letting them fire as soon as the target is in weapon range. On the other hand, this will give early warning to the target as well, which for some IR systems in particular might defeat the whole purpose of using a sneaky passive targeting system. On the third hand, since so many different systems use the same two detection units, it can be hard for the attacker to figure out the exact nature of what is about to shoot at them — if all you see is eight different “Dog Ear” cues on the RWR, you will not know if those are aiming SA-13 IR missiles, SA-15 radar missiles, or SA-19 optically guided missiles in your general direction (until it is too late). It also gives anti-radiation missiles more emitters to try to resolve or accidentally lock on to, wasting precious ordnance on something that does not actually reduce the threat for aircraft in the area.

From a mission-design standpoint, DCS' automated briefing screen will unfortunately give a lot of this away and ruin the surprise, as will the faked SA data loading that is integrated in aircraft such as the F-16, F/A-18, and Ka-50. Two mission editor options exist to “hide on planning screen” and “hide on MFD” that are supposed to suppress this free intel, but this functionality is unreliably and unevenly implemented in the different modules.

The SA-6 is a Soviet Mobile Medium range SAM developed in 1958 intended to cover ground forces from aerial attack.

Developed in 1971, this short range low altitude SAM is highly mobile and makes for a dangerous escort for ground forces or complement to other defences.

The 1980's successor to the SA-6, this medium range SAM can be extremely hard to kill.

Introduced in 1986 as a successor to the SA-8, this unit is even more of an annoying ankle biter than its predecessor.

The PPRU-1 mobile reconnaissance and air defence control point was introduced in the late 1970s as a unified way to coordinate mobile tactical air defence batteries such as the Shilka, Strela-1, Strela-10, Tor and Tunguska. 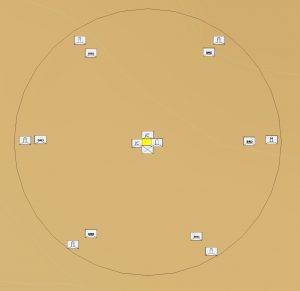 Typical Layout of an SA 2 (minus static or non-functional objects). Includes Shilkas and an Igla team to cover against low approaches.

The SA-2 is a Soviet Radar guided medium range high altitude SAM system developed in 1957, but continues to see use to this day. The missiles are given remote commands from a ground operator, effectively making them Semi-Active Radar Homing.

The SA-3 is a Soviet Radar guided Short Range SAM system developed in 1961 as a complement to the SA-2. Missiles are guided by remote command, but DCS treats them as SARHs.

Developed in 1979, this system is one of the most dangerous SAMs in the game (and real life).

Produced through the 60's and 80's, this gun is not terribly threatening by modern standards. Despite this, it's cheap and many exist, and so can be found in many arsenals of small nations. Its quad 2A14 23mm autocannons are still able to shred just about anything it hits, out to fairly decent ranges, and the only issue is hitting to begin with.

Infrared missiles do not alert pilots on the RWR (though Missile Approach Warning System aircraft like the A-10 and JF-17 may still be warned of an inbound missile). While modern militaries are more than happy to proliferate and sling cheap shots with these, it is recognized that they are a big "Fuck You" to inattentive pilots, and can render a mission unfun if not used judiciously. Many goon missions limit the use IR missiles to catch out pilots who strayed from the briefed course, or as an occasional threat to catch unaware pilots.

Note that IR lock-on distances can wildly exceed or fail to meet the nominal detection ranges of their respective systems since they operate on the basis of an IR signature size that may shrink or bloom depending on aspect, throttle position, and similar factors. For AI units, this rarely makes any difference since they are bound by the sensor detection mechanics, but a player-controlled unit can conceivably be very lucky and lock up a target much sooner than expected (but it is unlikely that the missile itself will actually fly that far).

Designed in 1968, this highly mobile rear-aspect SAM is still used in the middle east to present day.

Entering service in 1976, the SA-13 is the successor to the SA-9, improving upon it with all-aspect seekers and a radar to augment its targeting capabilities.

The direct predecessor to the ZSU-23-4 Shilka and to some extent the 57-2, this weapon continues to see use to present day. Since it's heyday in the 60's, it use has transitioned from AAA to ground fire support, and can be found rigged on the backs of many a pickup truck in third world countries.

This combination AAA and missile system was designed in the 70's to replace the Shilka and counter new threats like the A-10. Since it's first deployment in 1982, it has been used to provide all-weather day and night protection to infantry and tank regiments against CAS threats and cruise missiles.

A post-WWII self-propelled anti-aircraf gun (SPAAG), this two-barrelled, 57mm piece can be a pretty nasty surprise since it is essentially the post-war reincarnation of the anti-bomber flak cannon, and can reach surprisingly high altitudes — upwards of 13,000ft, and giving off no warning until the sky starts exploding. It is still optically guided so accuracy will not be stellar no matter what, but it can and will catch anyone who lazily flies straight and level within its operational range.

These units can be turned into ground-based GCI radars by assigning the advanced waypoint actions:

They are all static units and cannot be driven using Combined Arms, but offer detection capabilities that tie into the more realistic simulation modes of LotATC 4 DCS. The editor detection ring displays an artificial limit of how far detection scripting will report a target; actual ranges for the EWR task should be much longer, but have been bugged for years.[6]

The GRAU index would imply that this is a 1 = radio and electonics equipment, L = IFF system.

The GRAU index would imply that this is an in-atmosphere interception air-defence system (index 55).