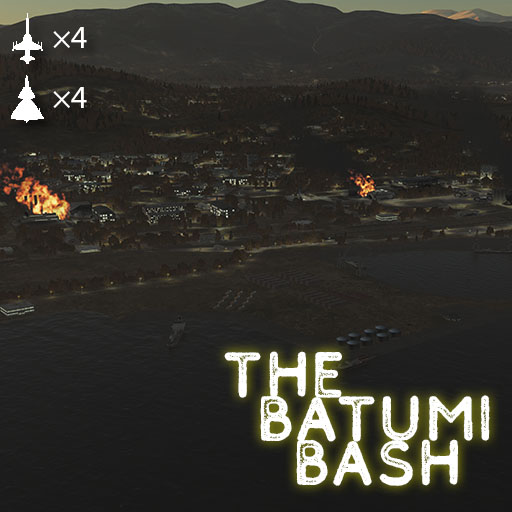 Alternative scoring is available in single-player, but the brief and general design assumes that multiple strike aircraft will be available (and required) to deal with all targets.

Rogue Turkish elements have crossed the southern Georgian border and occupied the harbour and airport at Batumi. Forward elements have already secured Kobuleti airport and are now pushing towards Senaki.

A multi-pronged attack is underway to halt the advance and to disrupt the still fragile support and logistics chain being built at up Batumi.

Satellite imagery suggests a Turkish destroyer is protecting the harbour, and sizeable anti-air exists at Batumi airport. These will be engaged through barrages from the Navy task force at point TUDEK.

Turkish alert fighters have been spotted at Batumi and Kabuleti. Batumi forces will be neutralised through a B-52 overflight, and Navy CAP will be available between points ROLIN and SOSED.

In addition, both Kobuleti and Kobuleti South airfields have significant anti-air coverage and should be circumvented by staying over the sea.

Cold start at 0815
The Batumi strike will commence as ground packages overfly Senaki, with a 10 minute flight time planned for missile strike, bombing run, and ground attack. Early arrival risks running into full AA coverage of the harbour and later arrival risks having to deal with any alert fighters being scrambled. Egress is towards the west to come under the cover of CAP and naval AEGIS umbrella.

The task force has designated 4 key targets in Batumi harbour:

Ground forces are engaged at Senaki, and CAS en enroute. Expect ground fire and disruption of airport facilities, as well as crossing CAS and MEDEVAC traffic. Do not engage or loiter.

The mission is about the lost art of low-level delivery of unguided munitions from a fast-moving aircraft without any fancy modern sighting systems. Or at least not with CCIP/CCRP — the Viggen can be devastatingly precise if employed correctly.

The F-5's lack of fancy navigation equipment means extensive use of TACAN offsets are needed to find the correct waypoints, and accurate flight speed control and timing of those waypoints is needed to stay safe during the attack. The Viggen has a more capable navigation suite, and the pilot can set up TID waypoint settings to get in-cockpit time-on-target indication to maintain the correct speed. Even so, flying over water will make the nav data drift fairly quickly, so the other on-board systems are needed to stay on the correct path.

In-game kneeboard pages provide a full description of the flight plan, and of the speeds required to stay within the correct window for the attack.