How To Make A DCS Livery 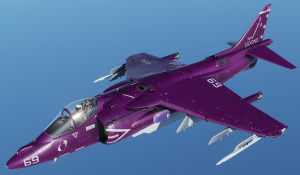 An example of what happens when goons fancy themselves artists.

DCS first party templates (and lots of third party templates) tend to take the form of photoshop files, with generally enough information to figure out what part of the image ends up on which part of the plane, as well as a series of prepared layers of base colors and details dirt and such, so you don't have to have an arts degree to make an airplane with a dick stamped on it look good. Most of the time, you only ever really muck around with the "livery" or "squadron" layers. Since templates between planes are very inconsistent, you'll have to figure out how to make it work within your artistic vision.

Once you've fiddled enough that you want to try to bring your textures in game, you will need to export the image to DDS format.

In Gimp, this is accomplished by:

DCS, being an extremely well coded game, keeps its aircraft files in one of two places:

So, to bring your glorious texture into the game, you need `description.lua` in your livery folder. I suggest copying one from another livery and just filling in the blanks. Remember to change `name` (usually found at the bottom of the document) to something unique.

As far as telling DCS what files to use, the lines do that use the following syntax: `{"f18c1", 0 ,"F18C_1_DIFF_420",false};` The first column tells the game what part of the plane to map to. Don't touch it. The second column tells the game what texture "channel" this is. Don't touch it. The third column should be the filename (without extension) of the texture being used. If you are overriding it with your own texture, then you need to change it. The fourth column tells DCS where to look for the texture: `true` means it will search the common textures directory for the texture. `false` means it will search your livery directory for the texture. If you want DCS to use your texture, you need to set it to false.

Gaze Upon Your Work

You could boot up DCS at this point and look at your plane in game, but that's a pain in the ass. Instead, we're going to use DCS's model viewer to look at your texture outside of the game.

A lot of the templates are missing items such as patches and helmets. You can make changes to those by copying the corresponding element from the `Textures` directory, making changes, and then adding your updated version to your livery folder, ensuring you update description.lua to match your new texture.

Newer aircraft allow you to tweak with the material properties of the aircraft using a physics based rendering system and "RoughMet" textures. This can be used to give aircraft chrome paintjobs, or make them look like giant flying crayons. The F-16, notably, uses a different material for its livery paint from the rest of the hull, so its necessary to edit this to prevent the "old paint" from shining in the sun.

RoughMets are DDS textures just like the ones you've been creating so far, but the colors are not for display and actually are being used to store different information. You can see an example of alternative RoughMets at work with any of EDs F-16 skins, the F-14 Chromecat skin, or with the F-18 Canada 150 skin.

The roughmet color data is telling DCS the following: