It's 01 June, 1992, 0600 in the morning. Soviet Union fell, and Caucasus region is in Turmoil. Northern Caucasus fell into a civil war, and opted to join with Georgia, but the political upheaval has not been bloodless. It didn't take long for the NATO forces to move in, to help secure Georgian possession, and guard against possible border violations against Russian Forces. The tensions have been running high, and it's clear war isn't too far. The northenmost holding of the new Georgian Republic is the city of Krasnodar, and the airports around it. At 0400 in the morning, light artillery shelling began around the area, but it was not targeted at the NATO airfield at Krasnodar Center. The planes are grounded, however. At roughyl 0445, Brussels relayed a message that made the situation clearer; The Black Sea fleet, led by the carrier Admiral Kuznetsov is sailing eastwards towards Novorossiysk, and they are there to refit. The hostility around the Black Sea has ensured the Black Sea Fleet has not had a friendly port to approach, and is short on supplies, now making dash towards Novorossiysk Port, in hopes of ensuring the Fleet's ability to assert dominance by the fledgling Moscow Government. Supply ships have gathered at the nearby port facility near Novorossiysk, at the Gelendzhik resort city and its port facility, which houses many of the supply ships needed to support the Black Sea Fleet. According to Brussels, the preparation of artillery near the contested areas is to ensure the fleet's safe arrival. However, Brussels has decided to engage the ports near Novorossiysk, and to cripple the fleet. Avoiding full escalation, it has been deemed to not attack the fleet itself, but to simply disable the port facility and to sink the supporting ships to create political pressure against Moscow in a limited-form precision strike. NATO ground troops are advancing west from Krasnodar to ensure safe operation around the airfield. The combined aerial task force of Norwegians, French, Americans, and Georgians is tasked with the mission. To create diversion, the task group will initially perform close range CAS against nearby Russian Ground troops about 10 miles from the airport to create an impression of self defence. The planes are then to return, and sent on the mission to sink the supply fleet. Sun is rising at 0600, and the morning brings the smell of jetfuel. 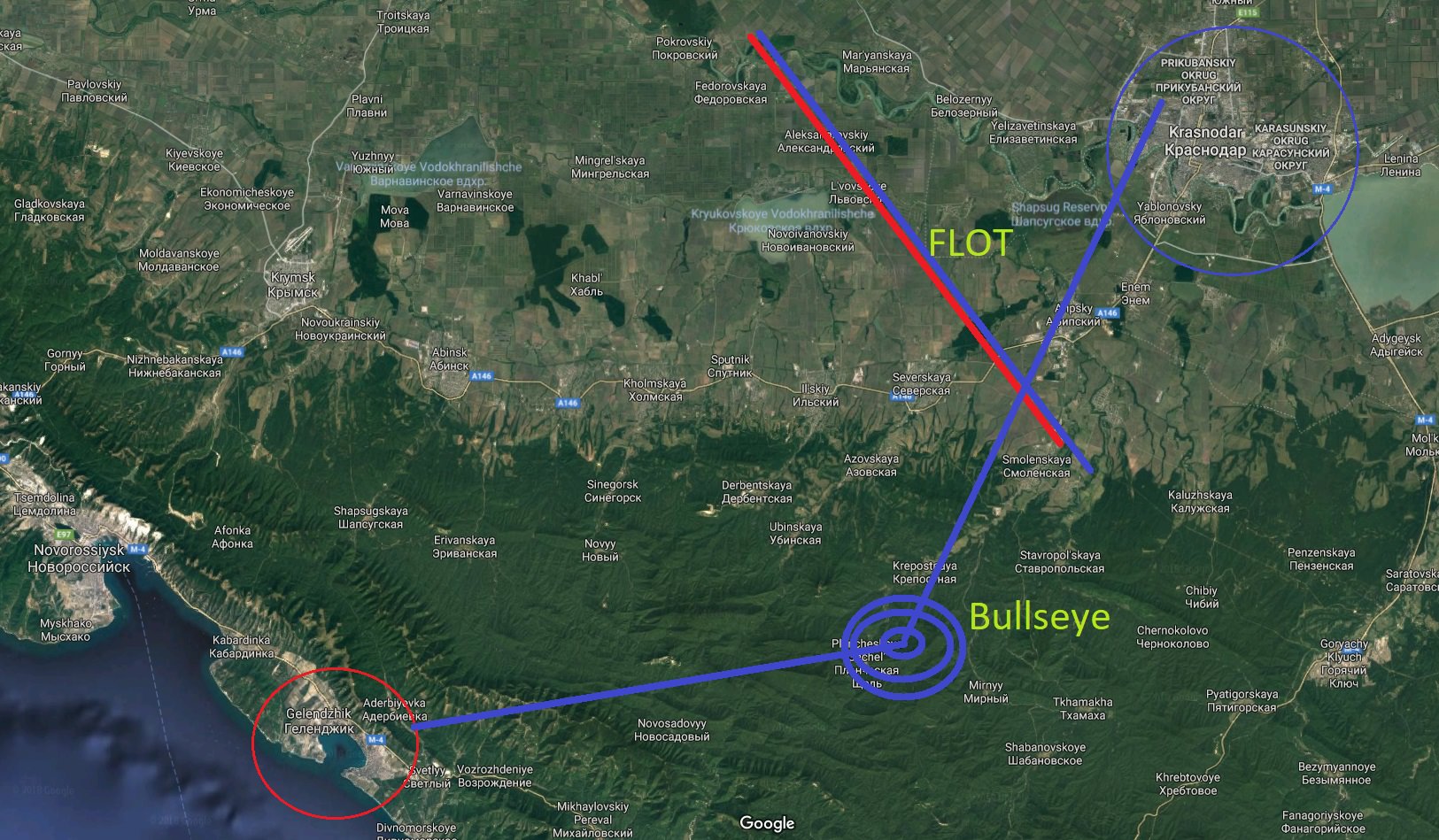 Initiate a border conflict against the Russian Forces to the west of the airfield.

Destroy most of the Russian forces near the FLOT 10 miles west of the Krasnodar Area. This is to create an impression of a border clash in self defence, providing cover for the main air strike.

Friendly NATO armored battalions are moving towards the battle to provide with support, and to create a more believable clash.

Strike the supply fleet at Gelendzhik port. The task is to sink the main oil tanker, and the accompanying frigate "Moskva". The enemy forces consist of two KUB sites, out of which one's location is known, some scattered Shilkas, and the extremely potent capability of Moskva itself. However, approaching from east, the mountains provide cover for a strike against the ship. The gunboats and other supply ships at the harbor are important, but secondary, targets. The Russian cruiser Admiral Ushakov is also at the harbor, but exhausted itself in a skirmish against the Hellenic Navy a week ago, and is extremely unlikely to be able to use most of its weapons. It fired all of its 64 S300s against a Hellenic Air Force TASMO package, and ran out of them after causing grievous losses to many Greek F-4s. Suppress the ground Air Defences, destroy the Frigate, destroy the Tanker, and attack any and all other targets of opportunity.

Time permitting, we will wreak havoc in the nearby port northwest, and destroy all available targets of opportunity Novorossiysk Harbor area. 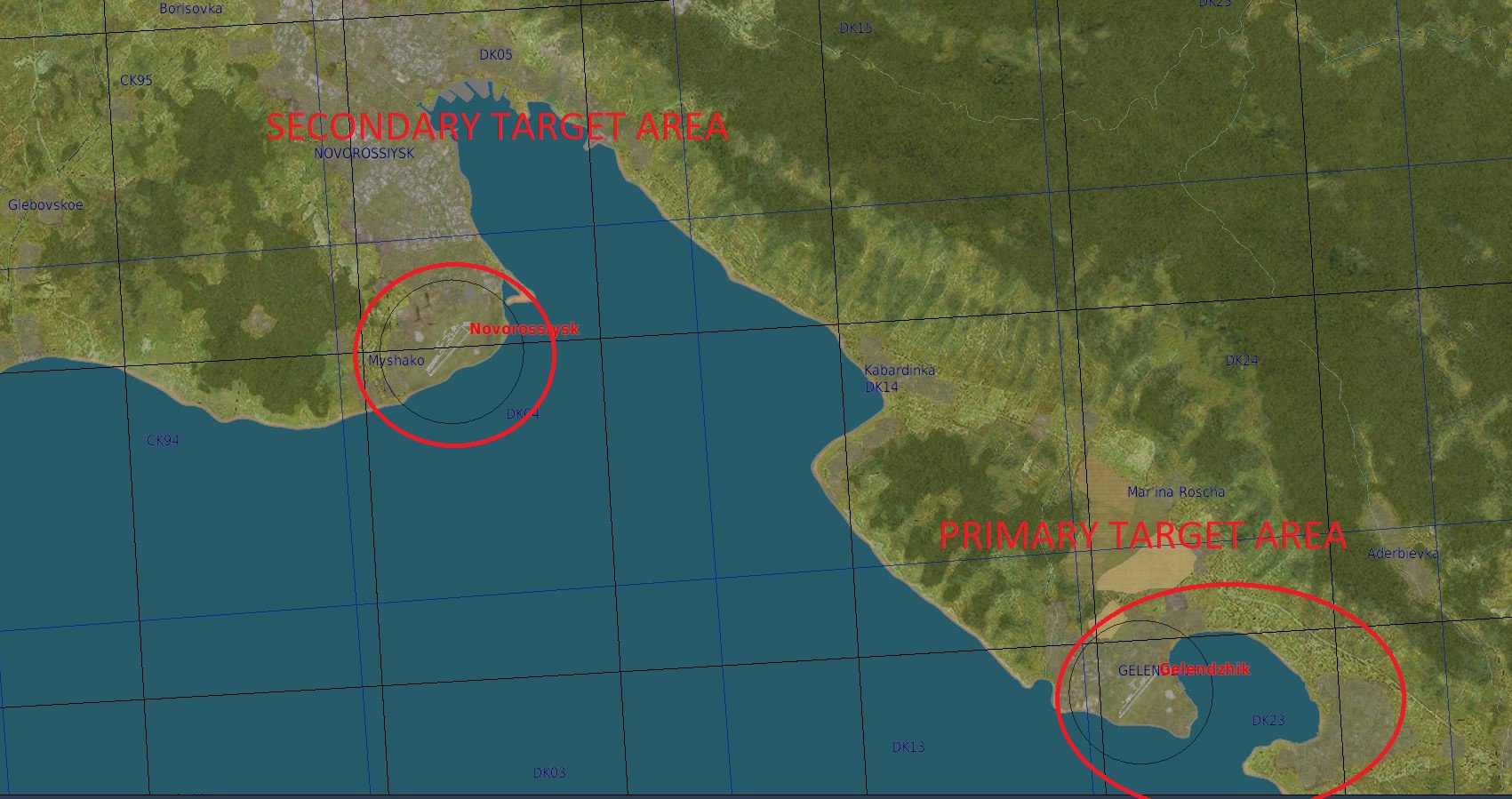 The confirmed enemy air forces in the area count a 4-ship of Mig-21s that are from a reserve squadron north of Novorossiysk, in a small airfield 40 nautical miles out. There is also a quick reaction force of Mig-23s at Sochi airport, about 80 nautical miles away. They are likely to respond immediately.

Novorossiysk itself has a 2-ship of MiG-29s assigned to defend the port. Besides these, some SU-33s from the Black Sea Fleet might respond, but their flight time would be 45 minutes or more after the attack on the harbor, so there is ample time. It is currently unknown if there are enemy Tankers or AWACS-craft in the area.