There are various extremely common HOTAS controllers. Odds are most of you will find a profile for Falcon BMS here.

Here are sub pages for controllers, and some fan favorite .key files for them for easy setup.

Overview of the F-16 HOTAS

It is laid out in two parts, the stick and the throttle. We'll go through some basic meanings of the buttons. 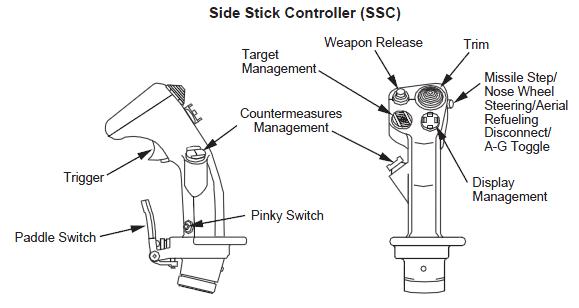 Trigger The trigger on the SSC is a two-stage trigger (Modeled on most game controllers). The first detent performs several functions, including starting ACMI recording. The second stage fires the aircraft's cannon.

Weapon Release The weapon release switch (also called the "pickle" button) is used to fire missiles, drop bombs, and jettison stores. The exact switch usage to release the weapon depends on which weapon is being used.

Pinky Switch This switch is used to cycle the field of view for the currently selected sensor of interest. This works for many MFD pages, including the FCR, infrared/laser targeting, and the HSD. 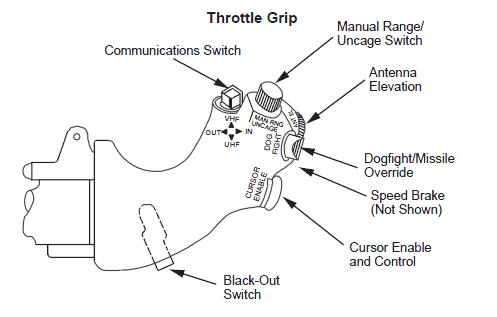 Communications Switch This switch is used to talk on various radio frequencies and handle datalink functions.

Uncage Switch This switch is used to "uncage" the seeker head for infrared missiles such as the AIM-9. When the seeker head is uncaged, it freely seeks targets and is not slaved to the aircraft's radar.

Antenna Elevation Knob This rotary knob is used to set the elevation angle for the radar antenna. This can be used to scan different altitudes for enemy aircraft. There is generally a detent at the central position to allow the pilot to easily re-center the antenna.

Dogfight/Missile Override Switch This is a three-way switch which is used to select the dogfight and missile override modes. If the switch is in the center position, neither override mode is selected.

Cursor Control This joystick-type control is used to move the cursor on the FCR and HSD MFD pages. It is also used to slew the radar antenna in the ACM 30x20 mode.

Blackout Switch The HOBO (hands-on blackout) switch is used to allow the pilot to control the aircraft's lighting with the HOTAS.