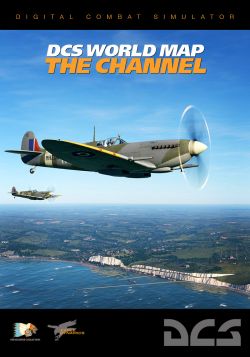 The Channel is the second WWII terrain for DCS: World to supplement the Normandy map. However, unlike all other WWII content released for DCS so far, the Channel is not set in mid-to-late 1944, but rather some four years earlier and is intended to cover such arenas as the Dunkirk evacuation and the Battle of Britain.

It is essentially just an extension of the Normandy map, but set in an earlier period of WWII when very few of the aircraft and ground units represented in DCS had been rolled out, or even developed yet. To no-one's surprise, the news of this map instantly draw criticism from those wanting historical accuracy in their WWII DCS:ing, since this terrain offers none due to this mismatch. It also drew criticism since it is just a continuation of the north-eastern part of the Normandy map rather than any of the myriads of regions of Europe that saw air combat and that aren't as commonly represented everywhere else.

However, it is perhaps the most detailed terrain yet, rivalling the Persian Gulf, but this is tempered by the relatively small scale in terms of surface covered. On the other hand, a lot of that detail is, unsurprisingly, era-specific so while it would be excellent scenery for helicopter-specific mission, for instance, the view out the window might be a bit anachronistic. 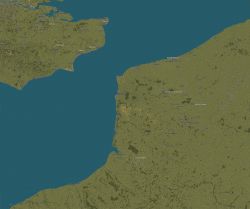 Coverage of The Channel map

Hard to tell since the exact scope of the map has not really been communicated. Compared to the Normandy map, it may seem like it could use a few more airfields. On the other hand it is more meant to cover something of a stalemate on the ground and an air-war based out of existing installations, as opposed to the quickly moving war front and the need for front-line bases that this would entail during the invasion in 1944.