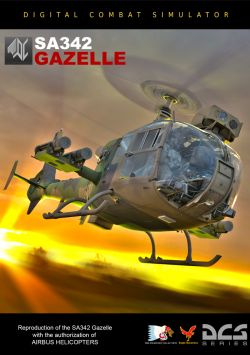 The Aérospatiale Gazelle is a light attack helicopter whose biggest claim to fame is either that it was the airframe that the Blue Thunder helicopter was built on, or its ridiculous speed and fenestron anti-torque device, depending on who you ask. In DCS World, it is represented through four different models, each with its own purpose:

Between the four different variants, the SA342 comes with a pretty decent selection of tools and functions:

In spite of this feature-list, and it not being labelled as early-access or anything similar in the store, this remains a fundamentally incomplete module with vast gaps in its simulation and realism. It works, but buyers should be aware that it is more of a UFO than a helicopter.

The SA342 certainly earns its title as a light attack helicopter, at least in relation to the thrust the engine produces. It is very quick to respond to cyclic, collective, and pedal input, to the point of being rather twitchy. The collective part, in particular, is outright broken (do not ask about it on forums — wars will ensue) since the way it is being modelled enables the Gazelle to effectively power its way out of VRS just by giving it a bit more welly… and helicopter aerodynamics should not allow that. That supposed power also lets it rocket off the ground at ridiculous speeds, and care needs to be taken when taking off and landing, or you will end up at completely the wrong altitude. In addition, it does not particularly respond to gravity or to aerodynamic forces in any sensible way, being capable of upside-down flight, yaw control without a tail, and 15G turns.

The flip side to that is that some parts of the simulation include very specific ways of breaking the helo. It is fairly easy to desync engine and rotor RPM during start-up, for instance, which pretty much instantly burns out the clutch and causes the whole bird to lose power. This is also a very likely consequence of accidentally moving the fuel lever too quickly, or just out of position while in flight — keep this in mind when choosing your binds. Hope you have practised your autorotation technique.

Under less silly flight conditions, its SAS takes the edge of some of its twitchiness, and with all the flight aids turned on it lets the pilot fly pretty much hands-off for long stretches of time. Similarly, at the other end of the spectrum, a hover mode can take over once the pilot has established some loose facsimile of a stable position (low speed, no greater change in altitude, and low pitch/roll angle). From this mode, vertical landings are a cinch, and the entire helicopter can even be slaved to the Viviane or Athos sight systems to ensure it is pointed in the right direction for a good shot. 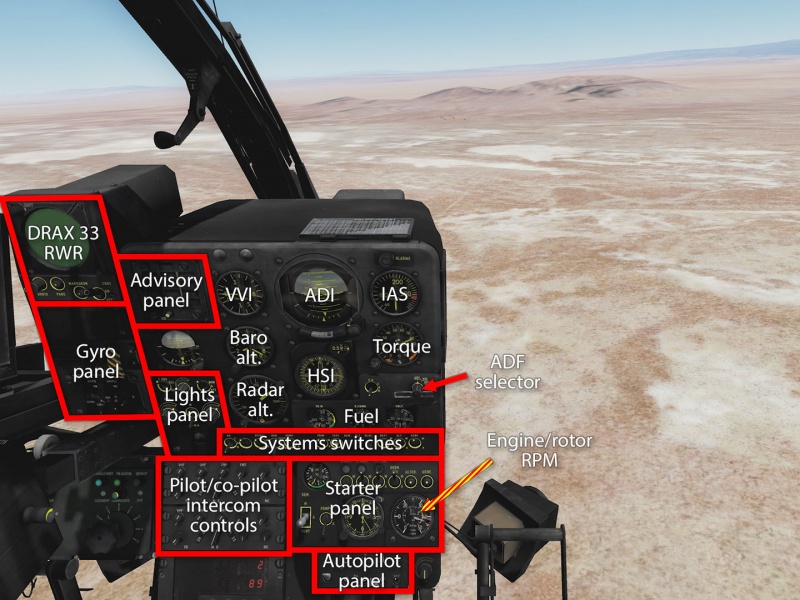 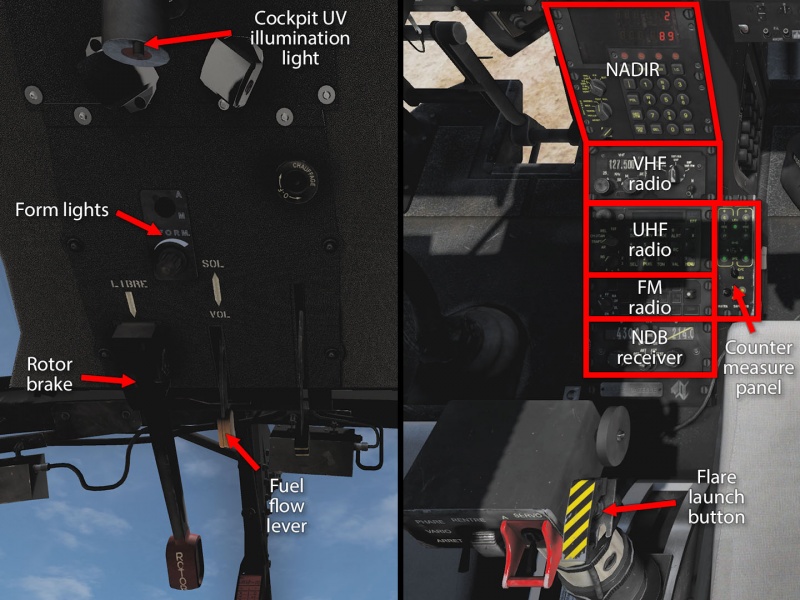 As far as helicopters go, the SA342 is fairly easy to get started, but it is still a bit of a process and requires some finesse so as to not ruin the vehicle before even getting off the ground. Like most full-sim aircraft, there is a RWinHome “cheat” shortcut that runs through startup procedures for you, and for the full details on what needs to be done, consult the manual or the guide and checklist linked below.

The general gist of if it all is to:

Note: untrimmed and at hover RPM:s, the torque and tilt of the rotors will make the SA342 want to yaw to the left and roll slightly forwards.

Lift the collective very slowly — keeping in mind how quickly the SA342 will respond — to feel the effect gradually come build up, and apply right pedal and slight aft stick input to counter it.

In the L and Mistral variants, making the SA342 expend ordnance is pretty trivial, and is best done from the pilot's seat. Turn on the ARMT. (Master Arm) switch on the dashboard, power the weapon(s) using the switch(es) on the centre console, and use the covered switches to select active pylons. Fold down the pilot's sight, aim and fire. In the Minigun variant, it is simpler still: just turn on ARMT. and the door gunner can now spray bullets wildly into to environment. 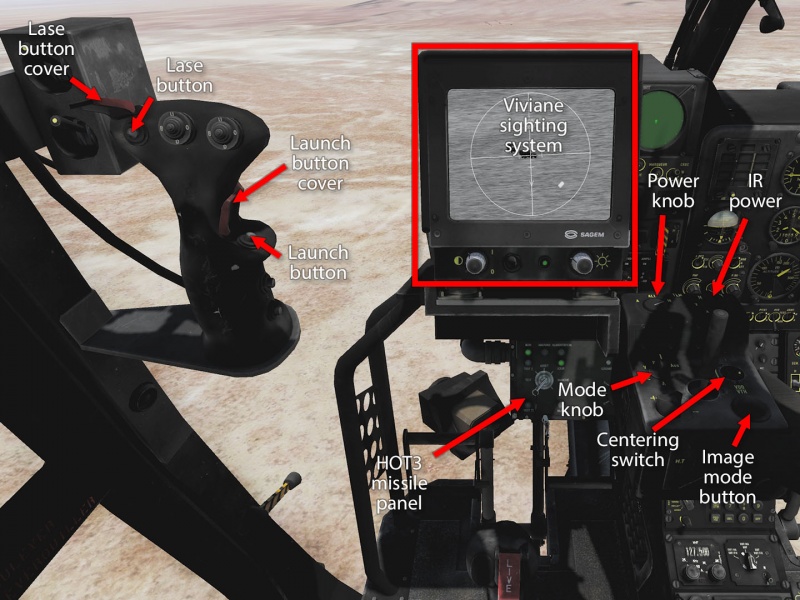 The HOT3 wire-guided missiles on the SA342M are a different story. They are controlled by the co-pilot using the Viviane EO/IR sighting system, using the HOT3 control panel, the TV control box, and the laser/missile control joystick. 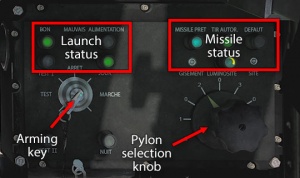 If the helicopter is flying in auto-hover mode, its heading can be slaved to the sighting system using the Slave button on the cyclic. This ensures that the aircraft will not drift out of alignment and cause the sight or missile to come off the target at the most inopportune moment.