In DCS World, the MiG-21bis is the logical continuation of the MiG-15bis (and also, in the real world, except the actual lineage between the two have many more intermediate steps). The MiG-15 was designed to intercept high-flying B-29 strategic bombers, and as those bomber designs evolved into the B-52, the interceptors needed to evolve as well. While some of its advantages are lost in the Modern Air Combat variant, since all aircraft in the package are just as easy to get going, the MiG-21 is designed to quickly scramble, climb to high altitude, and either catch up with or rapidly close with incoming aircraft. Operational range was not a huge concern, nor were sensors since GCI radar stations would guide the interceptor to the target. The on-board radar in the bis variant depicted in DCS is more for the employment of radar missiles than for detecting anything.

Even with those design constraints in mind, the MiG-21bis is also reasonably capable of performing limited air-to-ground attacks, and while not the most agile thing in the world, its engine allows it to engage in dogfighting without necessarily being on the defensive.

The MiG-21bis is as old as they come in DCS without being hopped-up prop planes (or just regular prop planes), and as such comes with all kinds of old-timey toys:

The MiG-21bis is a high-thrust delta wing, which makes it interesting, let us say, to fly. It climbs like a rocket, goes very fast, but those tiny wings make it wobbly at low speeds and does not like to change directions in a hurry. Or, rather, while it is more than able to pull the nose in any direction you might desire, doing so only results in truly horrendous AoA:s that lead to rapid energy losses, and possibly even engine flame-outs, but very little in the way of actual turning speed.

At the same time, if you keep the balance right, it can sustain a high-speed turn almost indefinitely, and can maintain surprisingly high turn rates — it just will not translate into staying on a the enemy's tail. It will do very well in boom-and-zoom engagements, even compared to much more modern aircraft, but will be woefully out of its depth if lured into a turn fight.

The high-speed characteristics also make it terrifying to land. You will not employ any kind of glidepath approach where you lazily waft down to the runway. Doing so means you will have to maintain such a high AoA that you can not see the runway until you notice that it is 400m to your left and you have just parked inside the control tower. Instead, you dive in at high speed (190-200kts or somewhere just below 400km/h or thereabouts will do just fine), with a shallow approach and low AoA, and rely on a sturdy landing gear, speed brakes and a drag chute to not completely overshoot the runway.

The MiG-21bis cockpit has to be the least user-friendly workspace, if not in the world, then at least in the DCS World. Based on placement alone, vertical velocity and radar coverage seems to be the most important thing to keep track of, never mind that engine performance and speed are more critical to monitor and that to actually manipulate the Sapfir, you have to keep track of controls scattered over four different panels. Fortunately, unlike the full-sim version, the MAC variant of the module abstracts away most of those headaches, although you still have to keep your head on a swivel to monitor all dials you want to keep track of. 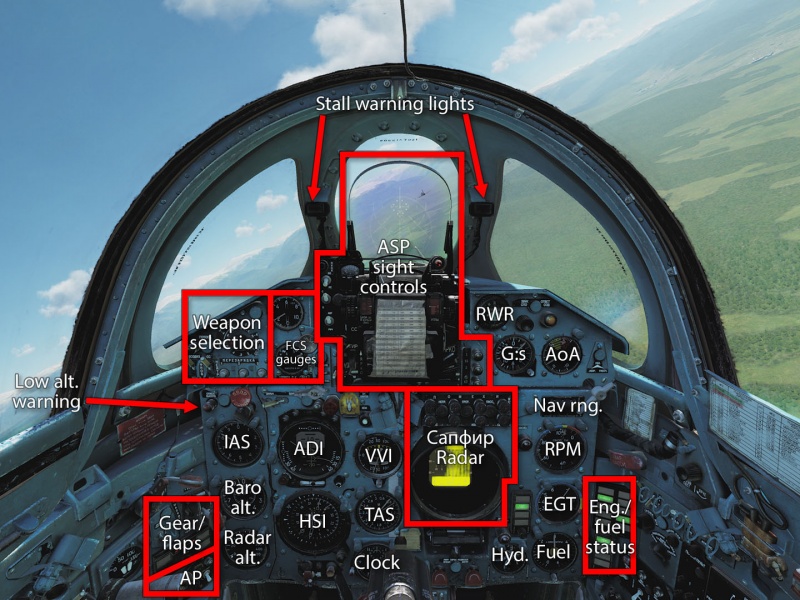 Getting the MiG-21bis into the air is much the same as all other MAC aircraft: