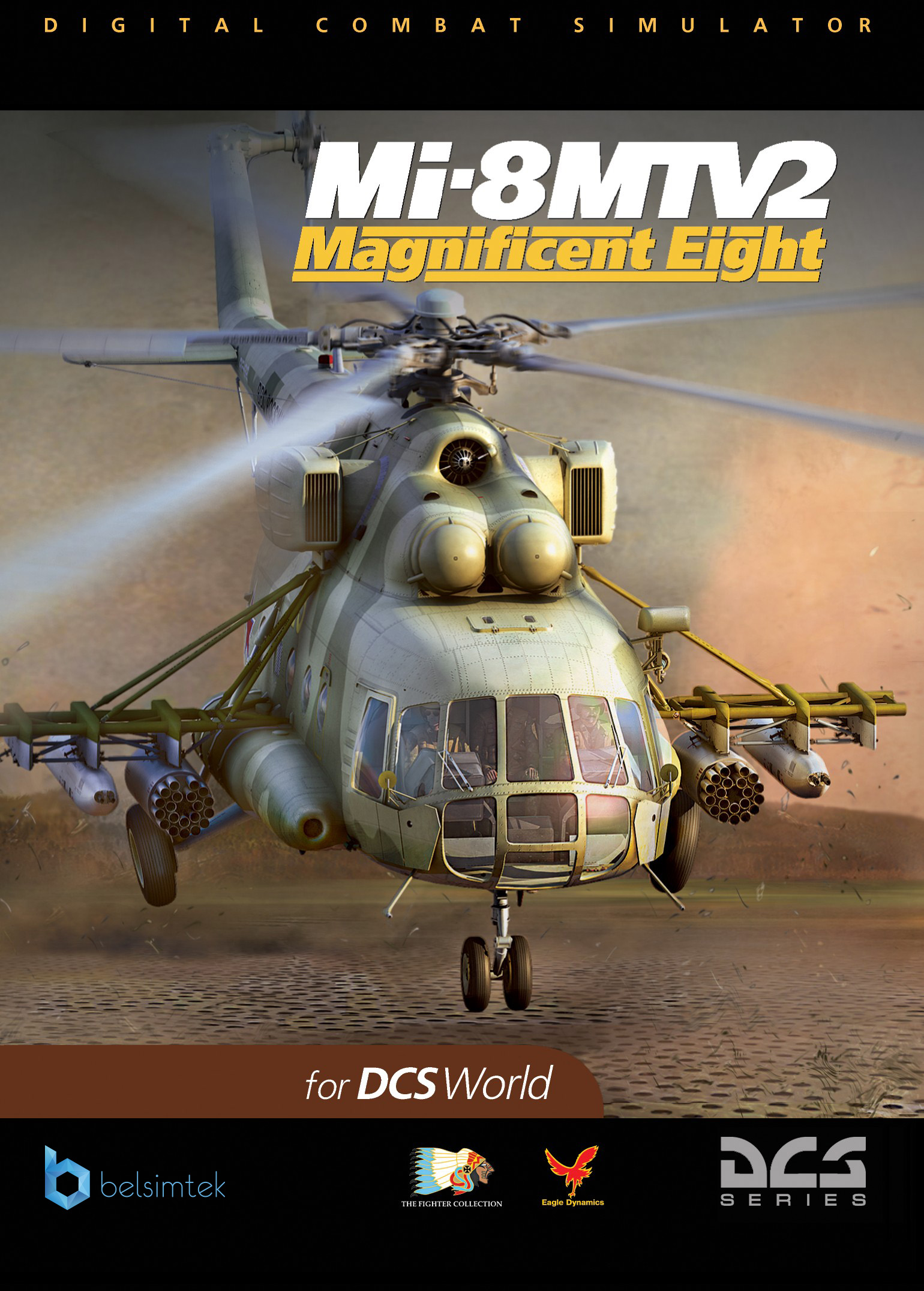 Take your average inner-city commuter bus. Now strap two honking great engines and an even greater and more honking rotor to it. Then strap rockets to it. No, more rockets. Oh, and go to your local CB:s-Я-Us switch wholesaler and buy out their entire stock to use as interior decoration. Congratulations, you now have yourself an Mi-8MTV2 — the not-yet-militarised version of the Mi-17 Hip, and one of the most common helicopters in the entire world.

In the DCS world, it is not quite as common because it is, after all, simply a very large transport helicopter that you just so happen to be able to strap some weapons pods onto. The bus comparison is a bit unfair — the Mi-8MTV2 can be a surprisingly fast and agile helicopter — but the engine and rotors that gives it that speed and agility are work horses. They are built to haul heavy loads over long distances, not to duck and weave in tight spaces, and they are slow to respond to throttle and collective inputs. The simile is more that of a 1500+ Hp diesel engine than a 500Hp V8.

The Mi-8MTV2's core task of “go to place; drop off stuff” is readily apparent when looking at its feature list:

Flying the Mi-8MTV2 can be summed up in three letters: R, P, and M. This bus lives or dies by the pilot's ability to maintain a steady high RPM by not asking the engine to do too much at the same time. The two TV3 engines can deliver a lot of power but will require time to do so, and will drop RPM if they get behind the curve. Dropped RPM, in turn, means a loss of electric power from the generators, and a loss of lift from the rotors.

This loss of electricity (and consequently of powered pilot aids) and the loss of lift will easily combine into a very disorganised ride down, but the aircraft can usually power out of it if enough speed, altitude, or just plain old time is available for the engine to sort itself out. Unfortunately, such a loss of RPM usually originates from the simultaneous and numerous high demands that come from take-offs and landings — situations where speed and altitude are low, and you do not have a whole lot of time until the trees grow uncomfortably large outside the cockpit windows.

The upside is that the Mi-8MTV2 is most commonly employed from airfields where it can employ running take-offs and landings. This means it can build up speed (or not slow down) while also having to worry about maintaining altitude, which bypasses the whole problem almost entirely. Even when low speed or hover transitions are required, the airframe will give ample warning that things are about to require extra attention. It goes through a period of significant and noisy cockpit shudders at around the 80km/h IAS mark as it starts to lose translational lift — this is an unmistakable signal that some proper RPM management is required.

The first thing that usually strikes a new pilot stepping into the Mi-8MTV2 cockpit is that someone seems to have shotgunned the ceiling with circuit-braker switches — indeed, any time anyone talks about this module, it is likely the first thing that will come up.

In spite of that first impression and reputation, however, the Mi-8MTV's cockpit is very well-organised and sensibly laid out. The infamous CB:s are clustered in clear groups, and the pilot, co-pilot, and flight engineer have direct and easy access to the things they should be dealing with: the pilot controls the flight instruments and the sling-loading; the co-pilot handles navigation and communication; the flight engineer monitors engines and electrics from the centre console and the side consoles. Most of those imposing rows of switches are flipped en masse at the very beginning of the start-up procedure and then never touched again. 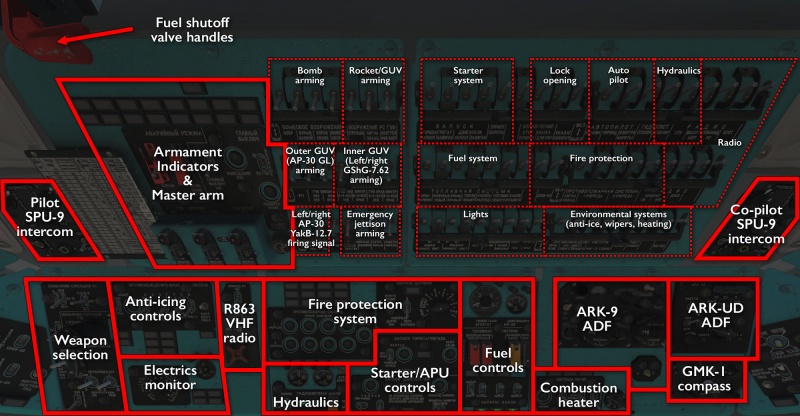 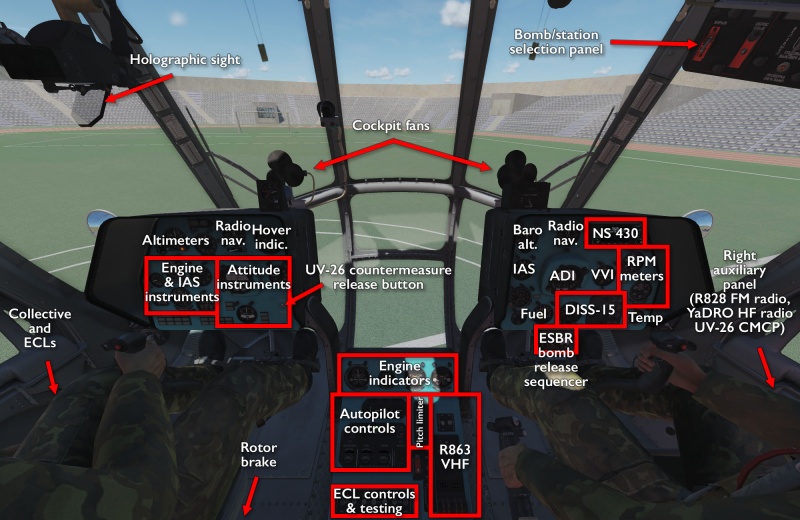 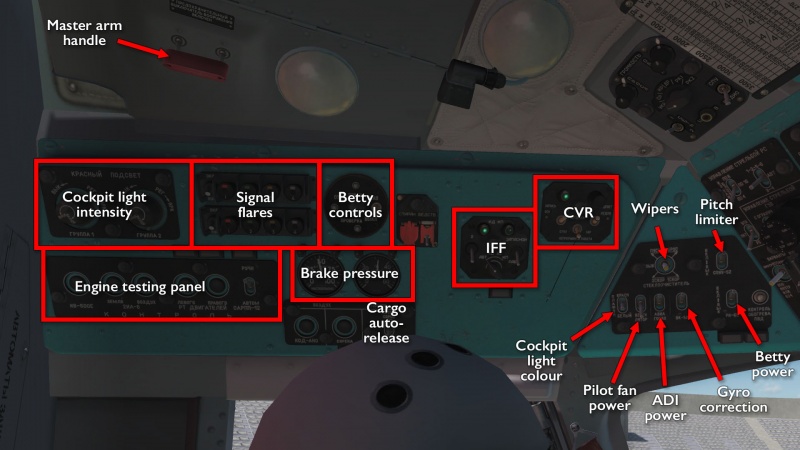 The one major exception is the employment of weapon systems, which is… a mess. The controls for them are still grouped, of sorts, but are nevertheless spread out to the point where all three crew members have to get involved before anything aggressive goes flying down-range. The co-pilot has to decide which pylons get the firing signal. The engineer has to make sure the systems are powered. The pilot has to select the appropriate system to fire, and set it up in a less than transparent way.

While the layout is reasonably good and logical, weapons management aside, it is generally advisable to get a high-quality cockpit livery for a language that the pilot understands, since finding the right switch or button can be a bit messy otherwise. Two particularly good arguments for this slight modding are the start and fire protection panels, where, in the first case, there are multiple ЗАПУК (Start) buttons and switches where the correct order is obvious if you read Russian and anything but if you do not. In the second case, flipping one innocuous switch at the wrong time can disable the entire aircraft because now the engine is full of extinguishing fluid — not understanding the label that says so can make for some embarrassing moments.

As with many other full-sim DCS aircraft, getting the Mi-8MTV2 started can be a long process, but unlike most of them, this is not because of some complex systems that need to be initialised — instead, there's simply a lot of stuff to turn on, and doing it out of order can overload the electrical system or run down the batteries in very short order.

As is often the case, there is a RWinHome “cheat” keyboard shortcut that runs through the startup process for you, but in the case of the Mi-8MTV2, it is actually somewhat unreliable. There are a number of outside parameters, such as wind and temperature, that can alter the timing of how the engines get going that the script might simply fail to do so. There are numerous good guides and checklists that run you through the process, though, and the module itself even comes with a built-in one — the main steps are listed on the kneeboard, and you can make an AI copilot run through the list for you, telling you what to do next.

The full procedure is far too long to describe here, but the general gist of it is: 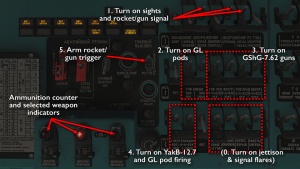 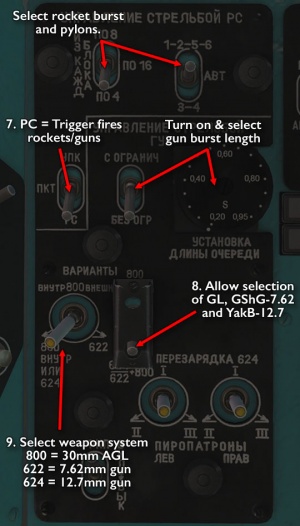 The Mi-8MTV2 is first and foremost a transport and lifting helicopter, but obviously, this means that it can lift a downright obscene amount of weapons — some of them can even be made to fire in a reasonably appropriate direction. The process for getting there is fairly complicated, however, and can get really mind-bending if you bring along bombs and need to figure out the right sequencing to have them drop in the right order.

More commonly, the Mi-8MTV2 is equipped with a combination of rockets and gun/grenade pods, and the layout of the controls make it readily apparent that this is indeed intended to be on of, if not the most obvious loadout. The process for getting everything going requires all three crew-members to do something at their respective stations:

This is perhaps the most readily obvious scenario that illustrates that, switch frenzy notwithstanding, there is a logic — if perhaps an obsessive need to control specific details — to how the systems are laid out. Let us, for instance, try to ready that standard loadout.

The engineer's job: activating the systems

Dive into the rightmost portion of the overhead maze of switches and turn on the ones that control the weapon systems you are carrying (or just all of them because it does not actually hurt to do so).

The co-pilot's job: selecting the pylon

Below the co-pilots triangular panel hangs the bomb control panel, which, as one might suspect, controls bombs, rockets, gun pods, and selective jettisoning… A handy little table shows off which modes on the dial activate which pylons for the purpose of using a specific weapon type. The most important ones are usually the ГУВ setting, which selects gun pods, and position IV (or position I), which activates rocket pods on the inner pylons. Thus:

The pilot's job: selecting the weapon

All weapons aside from bombs are managed through the pilot's overhead panel. While not strictly necessary, it may be good for the sake of completeness to specify exactly which rocket pylons to use, and whether or not you want different burst lengths. That hard decision aside, the pilot needs to:

…now, if only there was multi-crew so you did not actually have to do all of that on your own. Have a sip after all that switch-flipping, because all that is left is the lesser problem of making rounds fall where you want them to. From here on, the weapon selection is a matter of picking different positions on the three-way switch and going between the ГУВ and IV positions on the bomb control panel dial. For the pods, the currently selected weapon will display its ammo count and selection lamp on the overhead panel. Also, remember to flip up the cover on the stick РС trigger button. 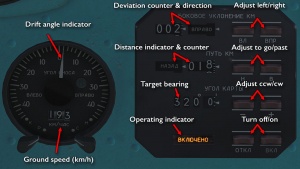 It is all fine and dandy to have five homing radio receivers, except for one little problem: they require a radio homing signal to receive. If you are the first to go somewhere, or want to be stealthy, or just want to deliver something in the middle of nowhere, chances are that there will not be anything of the kind waiting for you, and that even if there were, the signal would be blocked more often than not.

Enter the ДИСС-15 doppler navigation system, using ground sensing doppler radar to continuously calculate the Mi-8MTV2's movement across the ground or sea beneath it, and using this as a basis for determining its position relative to a fixed starting or ending point. If you intend to play the Oilfield campaign, you need to familiarise yourself with this mode of navigation since the exploration spots you are trying to track down (in various terrains and visibility conditions) are only indicated by such relative positions.

The operating principle is rather similar to TACAN offset navigation: you dial in a desired bearing and distance and try to fly in the correct compass direction, following a course deviation marker to guide yourself to the right spot where all the dials and numbers line up.

To use the system (skipping the process of turning it on during start-up — refer to the manual, guides, and checklists for that) in the most straight-forward way:

To get to where you intend to go, use the compass to fly in the desired direction, while keeping an eye on the drift angle indicator. Just because you are pointing, and apparently flying, in a specific direction does not mean this is your total direction of travel — the the drift angle indicator will tell you if you are being blown (or sloppily flown) off course, and the deviation counter tells you how many km to the left (ВЛЕВО) or right (ВПРАВО) you are off the desire track. If the drift angle shows zero, you are flying in a straight line, no matter what it looks like outside the window; and if the deviation counter shows 0km, you are staying on course.

If you are back-tracking (as set up using the В button), you obviously have to fly the opposite heading, but either way, you are trying to make the distance count down to zero, while maintaining zero drift and deviation at the same time. If you are doing a multi-leg trip, remember to stop, reset, and re-enter the new parameters at each turn. Ideally, this should be done while not moving.