Difference between revisions of "F-16C Viper"

Once upon a time, there were some deep rumblings within the defence establishment from a self-proclaimed “Fighter Mafia” that claimed that post-WWII aircraft development had taken a wrong turn. Instead of the on-going trend of expensive higher-tech, missile-laden, huge-engined multi-purpose fighters and bombers, this group advocated cheap, simple, nimble, single-purpose aircraft focused on two key roles: in-close dogfighting (because BFR was a fool's errand) and close air support where energy-manoeuvrability (E-M) was the one performance measure to rule them all.

The result of the Mafia's efforts were three aircraft: the A-10, the F-15, and the F-16. The A-10 ended up as a high-tech, missile-laden, far-from-single-purpose (if still CAS-focused) sensor array and bomb truck. The F-15 became a costly, high-tech, missile-laden, huge-engined BFR interceptor (and later a multi-purpose bomber as well, just to rub it in). And the F-16 — the finest example of their core tenets — became a high-tech, missile-laden, huge-engined, BFR/dogfighter/fighter-bomber platform onto which every conceivable piece of aircraft tech could be (and was) bolted, creating the multiest-rolliest thing in the sky. Zero for three for the Fighter Mafia, but still a highly impressive legacy.

The F-16C Viper is the last DCS module to complete the trifecta and an attempt give people a reason to finally abandon Falcon BMS. It is also, almost ironically and in spite of how it evolved over the years, still the aircraft that most closely matches the initial ideas of the E-M fighter: a ridiculously manoeuvrable dogfighter that just so happened to be an excellent airframe for a ton of other roles.

Much like — some would argue much more than — the F/A-18 that was its main competition in the Lightweight Fighter trials, the F-16C is a multi-role fighter, working as the USAF bulk workhorse for many decades. As such, again much like with the Hornet, a full feature list would become ridiculously long. The main highlights are:

The F-16C Viper is marked as Early Access in the DCS store for very good reasons. A lot of forum drama has been caused by a constant push and pull between work on the Viper and the completion of the Hornet module, and many systems and tools familiar to old BMS players are still missing — more still will never come.

In particular, ED has stated that some much-loved features from BMS will never come because the block simulated in the Viper module never had them:

The F-16 was the first aircraft to use a dynamically unstable flight dynamic under the control of a fly-by-wire system to create a highly agile yet highly controllable aircraft. While it is very quick to respond to inputs, and was designed from the start to let rapid rolls and tight 9G turns, it is not actually twitchy or nervous, and will respond to a steady hand with very stable and controlled flight. It is entirely possible to overwhelm the FBW system and end up in a very bad situation, but it takes some doing, and for the most part it is just a matter of suggesting a direction for the plane to go and it will do so.

This is made especially evident in two ways: one is when landing, when much like any other FBW aircraft, you only really need to dial in the proper AoA (as indicated by the indexer next to the HUD and the AoA staple in the landing HUD screen) and the Viper will maintain that angle. Unless there's a lot of wind to parry, you only really need to use the throttle to move the velocity vector up and down to where it needs to be. The other is just plain ferry flight, where a highly competent autopilot can dutifully follow waypoints for you or even go into circling patterns around fixed points if you ask it to, leaving you to fully attend to sensor usage and weapons delivery. 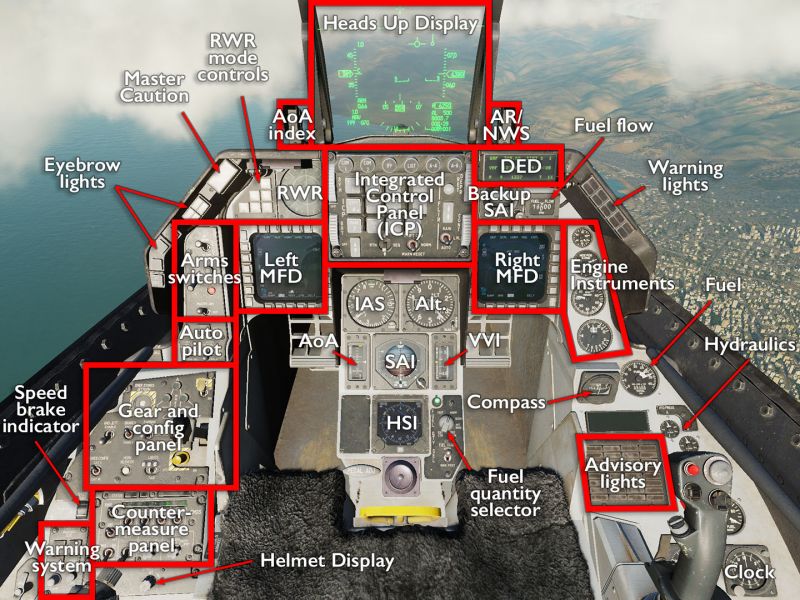 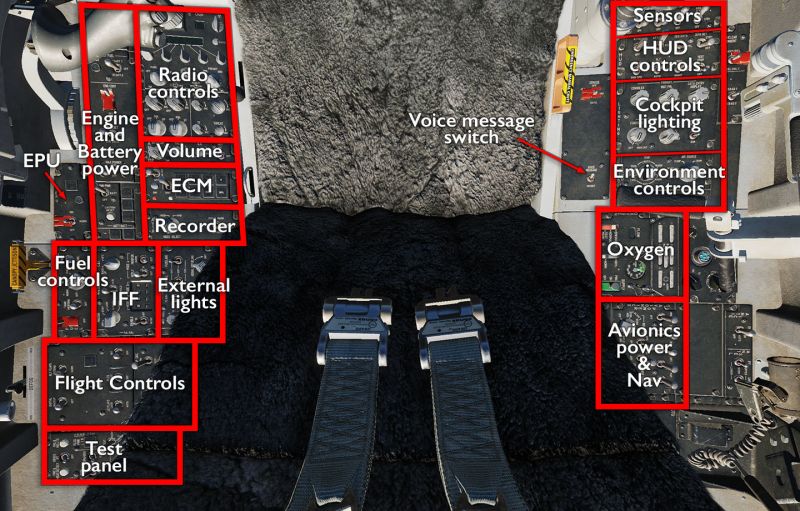 In spite of being a full-sim aircraft (albeit still an incomplete one) and a rather advanced one at that, given all the extra bits that have been bolted onto the airframe over the years, the F-16C is surprisingly easy to get going. As with most modern aircraft, its navigation alignment process can take a while, but the rest is very familiar and brief to anyone who's gotten into the DCS swtich-flipping. It is less involved than the F/A-18C and a far cry from the multiple interdependent systems A-10C.

As always the RWinHome “cheat” key combo is available to automate the start-up process, and the manual and Chuck's guide linked below give a full account of the procedure. The broad strokes are:

The purpose of the Viper is to make things go boom. Consequently, a fair amount of work has gone into making that as easy as possible and there are three common and easy-to-reach controls that go into that no matter what: the Master Arm switch (can't shoot things if you don't turn shoot on); the AA mode override switch on the throttle (that lets you quickly switch to BFR and dogfight modes); and the master A-A and A-G master mode buttons along the top of the ICP.

If at any time things are not behaving as expected, check these three first: that the override switch is in the middle (no override) position, that master arm is on, and that you are actually in the right master mode. Also, naturally, there are usually all kinds of sensors involved that need to be turned on (radar, TGP, head cueing system etc.) but those are more purpose-specific.

Completely contrary to the initial design goal, and in spite of not being able to carry quite the same insane amount of AMRAAMs as the Eagle or Hornet, the Viper is a highly capable BFR platform. Its speed and climbing power lets it position itself for very long shots and its data-linking capability (once it is fully fleshed out in the module) lets it make sense of, and usefully partition, very large blobs of enemies on the radar.

To toss an AMRAAM at something offensive, you need to:

The AMRAAM will fly towards a point in space where it can hopefully start tracking the bugged target on its own — if the target manoeuvres outside of the missile's detection zone, it will go dumb. The time until the missile goes active is shown on the right side of the HUD at the bottom of the launch zone display, using the form “Axx” where the xx signifies the time left to pitbull.

By cycling through system targets using TMS Right, you can quickly fire off multiple missiles against multiple targets in rapid succession. 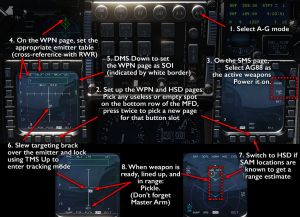 The AGM-88C High Speed Anti-Radiation Missile is a very capable missile that can be used in a number of different ways. Unfortunately, most of those ways have yet to be implemented in the DCS version of the Viper. All that is available at the moment is the HAS (HARM as Sensor) mode. Fortunately, it is still a very capable and easy-to-use mode, but it requires a bit of fore-knowledge and/or quick fingers to get to work properly.

HAS uses a number of different “Tables” to filter out different signals for the HARM sensor to pick up, and it is essentially looking for those signals through the missile's seeker, kind of like how you would use a Maverick. The main downside is that this mode just finds signals — it has no way of telling how far away they are, only if their head-on relationship to the seeker head. With a bit of luck you know of the SAM locations already and have them marked on your HSD page, which lets you get a range estimate that way, but the missile itself has no idea and will just head straight for the signal, which reduces its effective range to the fanciful numbers it would get when lofted. Other targeting modes and sensors (like the much-awaited HTS — HARM Targeting System pod) lets the missile go much further and in much more useful directions than straight ahead.

This lacking feature, along with the lack of a proper DTC system for the F-16 that would let you set up your master modes ahead of time, means that a bit of preparation is needed to get the missile going. 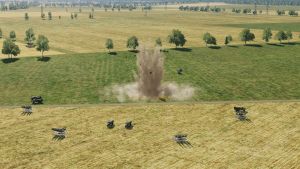 A Thunderbirds F-16 at the National Museum of the USAF
Retrieved from "https://www.airgoons.com/wiki/index.php?title=F-16C_Viper&oldid=4379"
Categories: