So you decided to take an interest in playing Digital Combat Simulator? And there is no way to change your mind? Oh well, in that case, it is always good to have a good start in the ruination of your life. This guide is intended for those who are taking their first steps into this glorious mess of buttons, charts, clicky UI bits, and strange software behaviours.

The good news: DCS is free software. It can be downloaded and played for free. The bad news: the free package is nice enough, but limited, and the aircraft modules that are DCS's claim to fame cost. Some of them cost a lot. And there are tons of them. The worst news: to actually get anything of value out of DCS, you are going to need a beefy computer and will develop a creeping urge to collect more and more, increasingly expensive, oddball peripherals.

Before you get it, though, consider whether it will be worth it. The [official site lists some… very optimistic, let's say, minimum requirements. Ignore those and instead look at the recommended specs as a good guideline for what will actually provide a reasonably satisfying experience:

The memory requirement is of particular note here — 32GB is something you risk needing if and when you start to get into the more complex missions, campaigns, or on-line play. You can get by with less, usually, but it can get hitchy as the game has to swap assets in and out.

Something that is not listed as a minimum requirement, but really should be just like with the recommended specs is a joystick, preferably with a separate throttle. DCS ostensibly supports playing with just keyboard and mouse, but it is an abysmal experience and will not end well.

The two main sources for getting DCS are the Steam version from Steam (shocking!) and the stand-alone version from the official website. It is a never-ending debate which is the better choice. As a general rule, Steam makes it easier to stay up-to-date and its download servers are faster, but it can sometimes lag behind on patches and on module availability. The stand-alone version gets all the things, and it gets the newest updates sooner, but it has a much more obscure update procedure and doesn't have the world-spanning high-speed content delivery of Steam.

You can also sort of do both: get the game and most module from Steam to benefit from its sales, but run the stand-alone client to benefit from the latest content, and transfer your Steam purchases. Doing so requires you to register on the official site, and then associating your Steam account with that registration.

A final choice before getting started is whether you want to stay on the safe(ish) side and only run the stable release, or if you want to delve into the more precarious territory of running the beta version. In practice, the “stable” build is rarely more stable than the beta — it is just the latest version where there are no complete showstopping bugs. The beta version may come out broken in various hilarious (or even outright unplayable) ways, but for the most part, it works just fine and has the latest updates, the latest content, and the latest bugfixes. All of these are the core reasons why most multiplayer servers run the beta version. If you want to get into the flying-together community side of things, you will have to run the beta.

If you are running the stand-alone version, a separate download is available for the beta but there is no reason to use it. Quite the opposite. It will create a separate install with its own configuration path and it will in general make things much more annoying to manage, especially if and when you want to install any kind of mods. Instead, you should install and update the stable version to the beta branch. It is slightly more complicated to do at first but saves a lot of headache in the long run. For the Steam version, getting into the beta is done the same way with DCS as with any other game: you open up the game properties in the Steam browser and opt in to the beta version, which will then download and install over your existing game.

Main article: Getting Set up

Remember the emphasis put on getting a joystick? That's because what you get will determine a lot about how you set up your game. Once you get into more of the game, you will quickly notice that the first thing that happens whenever you purchase a new module is that you find yourself staring at the control binds screen trying to figure out how to make the thing do what you want.

The section on ruining your life (and economy) with gear purchases will delve deeper into the different options, but generally you are looking at four levels of stick complexity:

If you get in at a sensible entry- or enthusiast level, it may at first sound like a dozen buttons or more is plentiful, but you will soon realise that this only covers a small fraction of what even a moderately complex aircraft expects you to bind and immediately have at hand (for comparison, the Warthog, which replicates the real-life F-16 and A-10 stick, has 26 buttons on the stick alone and almost twice that on the throttle).

Thus, having spent that cash to play this “free” game, and having everything plugged in and ready, you find yourself at the DCS bind screen trying to squeeze in as much as possible. Fortunately DCS has some handy built-in features that let you double up on your controls without having to deal with any external driver-level reprogramming or juggling of different hardware profiles. 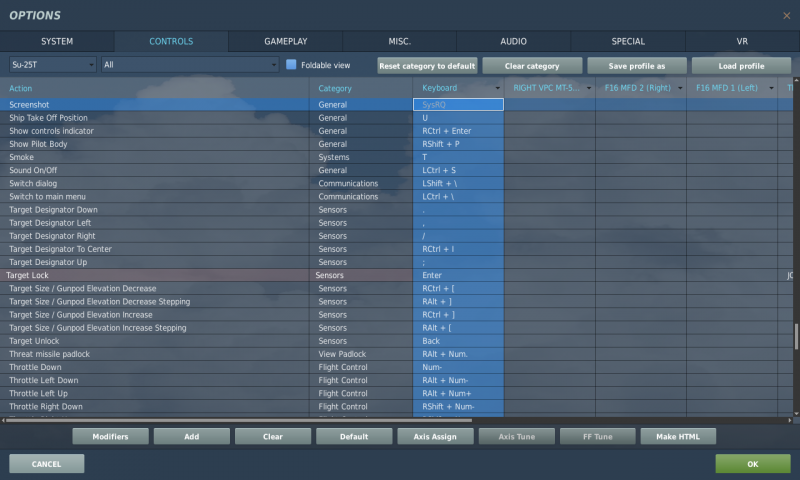