Angle of attack (AOA) is an important concept in aerodynamics and aviation. It is one of the first concepts taught to all pilots, both civilian and military, since it plays a large role in most flight maneuvers and in keeping the aircraft under control.

Angle of attack is defined as the angle between the chord line of the aircraft's wing and the relative wind(direction of the wind flow striking the leading edge of the wing). In non-technical terms, this basically means that it is the difference between the aircraft's pitch angle and the vertical angle that the aircraft is actually flying. 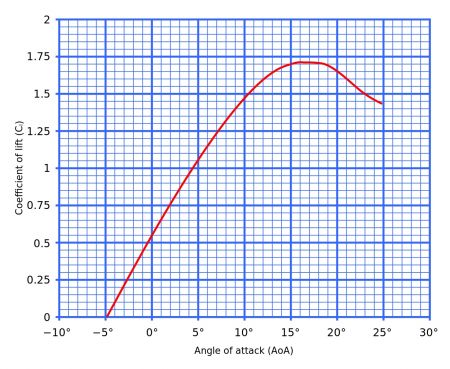 A typical lift curve. In this case, the critical angle of attack is at around 16 degrees

Tip: In a stall, the wing is still producing lift, just less lift

To recover from the stall, simply reduce the AoA of the wing by releasing pressure on the stick.

Drag is produced whenever the wing is generating lift (known as induced drag). This drag increases as the angle of attack is increased (since more lift is being generated).

What this means for the average goon is that while AoA being high might not ruin all of your lift, it might still be a huge negative factor in your drag. If you need to regain airspeed quickly, you should unload the wing, decreasing AoA and thus drag.

Determining Your AOA in F-16

Unlike many civilian aircraft, angle of attack is actually quite easy to determine in the F-16. There are multiple instruments which directly tell you your AoA, and several indirect indications as well. The angle of attack gauge (located underneath the analog altimeter and directly next to your left knee) tells you your angle of attack, in degrees. It also has color bands which correspond to the angle of attack indexer next to the HUD. 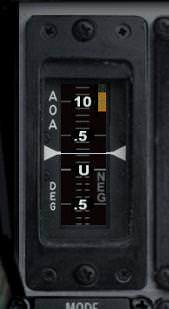 The AOA indicators on older aircraft do not display absolute angles of attack, but are arbitrary units grouped around the optimum with specific areas of interest. The Navy typically uses a 30 degree scale while the Air Force doesn't really have a pattern.